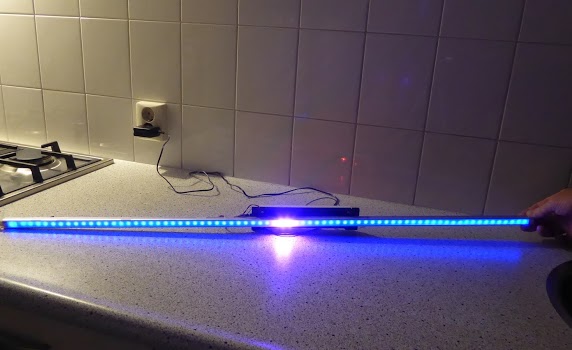 This is a nice project by Roel Arits. The project appeared on www.elektormagazine.com and you can find the source files there.

This project has no practical use at all, but was initiated as an exercise in implementing physics formulas related to gravity in C-code on an Arduino. To make things visible, a neopixel LED-strip with 74 LEDs was used. The effect of the gravitational acceleration on an object is demonstrated by using a MPU-6050 accelerometer and gyroscope chip. This chip is physically attached to the LED-strip, so when the LED-strip is held at a certain angle, the chip measures the angle of the LED strip and the Arduino uses this information to update the position of a virtual object as if it was a ball that is balanced on a beam and rolls from one side to the other if the beam is held at an angle. The position of the virtual object is indicated on the LED strip as a single LED that is illuminated.