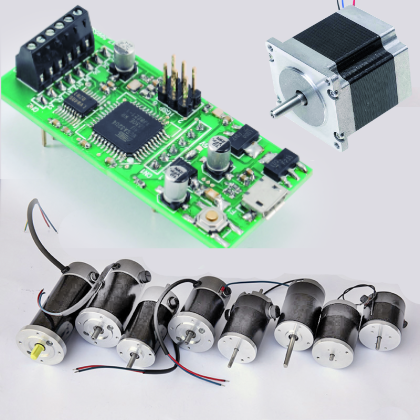 OPEN MOTOR CONTROL – An open source motor controller for everyone

It is open source and based upon the ATmega32U4 microcontroller, and provided with drivers for two DC brush motors and a stepper motor. It receives commands via USB or serial ports, or via the I²C bus.

For those dealing with robotics, one of the problems to solve is the management of the motors used for the traction, that is to say: how to correctly power the motors needed in order to make your robot advance. If you work with Arduino, the first and immediate solution is to use a shield. Several of them can be found available for sale, from the simplest ones that allow to control separately the two small DC motors, to the most advanced ones that are able to measure the current drawn as well. Regardless of the manufacturer, the shields are all based on the usage of a power driver (usually the L298), that is directly interfaced to Arduino’s PWM outputs, and encircled by a few other components. Surely the usage of a shield is a valid solution, but then we need to use at least four Arduino outputs: usually two to adjust the speed and two for the direction. If, on the other hand, you use a generic microcontroller, or a stand-alone Atmel chip, or a board that is different from Arduino, things get a bit more complicated, since on the market it is difficult to find drivers with a more flexible interface, and the price starts to rise quickly.  If you then have the need to command two motors, things get very complicated, even for those using an Arduino board, because problems arise both on the hardware and on the device programming point of view.