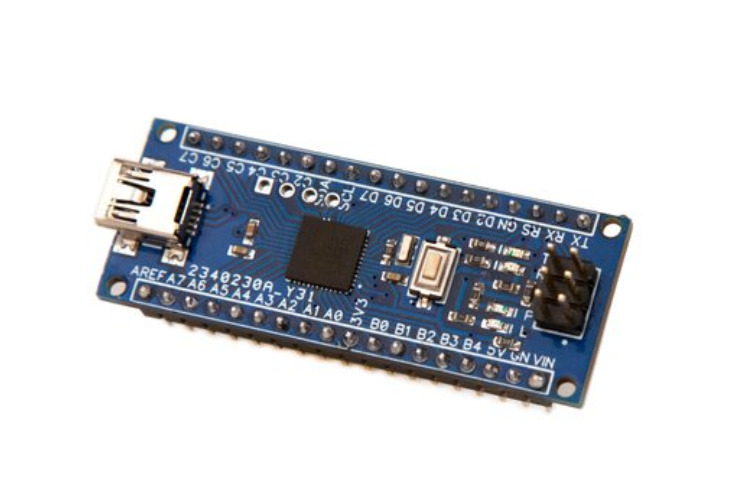 644 Narrow and 1284 Narrow are small, simple, ATmega644/1824-based boards, which are designed to improve small footprint Arduino projects. The Narrow board enables two to eight times more flash and RAM resources and ten more digital I/O as compared to an Uno/Nano, plus total compatibility. The Catalonian maker Thierry Guennou claims:

“they are the smallest ever breadboard-compatible development boards to feature the Microchip ATmega644 or ATmega1284 microcontrollers.” He continues “Many microcontroller-based projects need to have the smallest possible footprint and a lot of resources. Up until now, the Arduino Nano has certainly been popular for its price/performance value and small footprint…”

The 644 and 1284 Narrow boards both feature a large amount of effective Flash and RAM. They are described as “Effective” because the code generated on 8-bit MCUs is much smaller than on 32-bit MCUs. Hence, you can load a bigger program on a 128k 8-bit MCU than on a 256k 32-bit MCU! ATmega644/1284 also has EEPROM that adds to their total storage capabilities. Cortex processors can emulate EEPROM, but this further consumes flash (in whole pages) and wears out the memory.

The specifications varies by the model you are choosing. For the Pandauino 644 Narrow, it enables ATmega644 microcontroller and features 64kB of flash storage, 4kB of static RAM (SRAM), and 2kB of EEPROM storage on-board. However, the Pandauino 1284 features ATmega1284  microcontroller and enables flash storage of 128kB, SRAM to 16kB, and 4KB of EEPROM. Despite the differences in the microcontrollers they both feature, they share some similarities in features, like they enable the same amount of break out pins at 24 digital and eight analog I/O pins, however, the 1284 Narrow offers eight pulse-width-modulated outputs, while the 644 Narrow offers six. They both offer extra connectivity than the UNO and Nano boards. Both boards measure at 1,097mm² in footprint and weigh 8g.

For manufacturing plans, he says

“PCBs will be high quality and lead-free. Sourcing will be from specialized distributors I have used reliably in the past. Depending on the number of backers, I will either:

.Assemble, program, and inspect the boards myself.
.Assemble partly with an assembly company and complete the programming and inspection myself.”

As the campaign progresses, more information about schematics, programming examples and user manual will be provided with a GitHub repository. Funding ends on Jul 30, 2020 at 04:59 PM PDT (11:59 PM UTC), and Crowd Supply will handle all deliveries. Within USA, orders will be free of charge, while all international (non-US) will be charged a surcharge. More details about the Pandauino 644 and 1284 Narrow boards are can be found  on Crowd Supply, pricing at  $29 and $35 respectively.