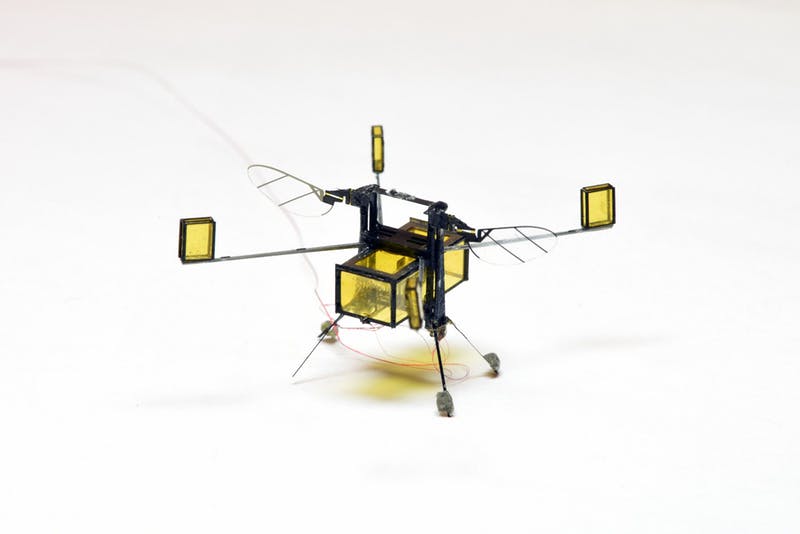 RoboBee – A Flying Microbot That Can Perform Search And Rescue Missions

Inspired by the biology of a bee, researchers at the Wyss Institute developed RoboBees, man-made microbots that could perform endless roles in agriculture or disaster relief. A RoboBee is about half the size of a paper clip, weighs less than one-tenth of a gram, and flies using materials that contract when an electric pulse is applied. Now, they progressed even further and designed a hybrid RoboBee that can fly, dive into water, swim, propel itself back out of the water, and safely land.

New floating devices allow this multipurpose air-water microrobot to stabilize on the water’s surface before an internal combustion system ignites to propel it back into the air. This latest-generation RoboBee is 1000 times lighter than any previous aerial-to-aquatic robot. This can be used for numerous applications, from search-and-rescue operations to environmental monitoring and biological studies. Yufeng Chen, Ph.D. and a Postdoctoral Fellow at the Wyss Institute, said:

The researchers have faced numerous challenges to design a millimeter-sized robot that moves in and out of the water. The robot’s wing flapping speed will vary widely between the two mediums as water is 1000 times denser than air. If the flapping frequency is too low, the RoboBee can’t fly. If it’s too high, the wing will snap off in the water. So, it requires a precise balancing as well as a smart multimodal locomotive strategy to overcome this problem.

RoboBee has four buoyant outriggers and a central gas collection chamber. Once the RoboBee swims to the surface, an electrolytic plate in the chamber converts water into oxyhydrogen, a highly combustible gas fuel. The gas increases the robot’s buoyancy and pushes the wings out of the water. The outriggers stabilize the RoboBee on the water’s surface. Elizabeth Farrell Helbling, a graduate student in the Microrobotics Lab, said:

Because the RoboBee has a limited payload capacity, it cannot carry its own fuel, so we had to come up with a creative solution to exploit resources from the environment.

The research team hopes that in future research the RoboBee can fly immediately upon propulsion out of the water, which is currently not possible due to the lack of onboard sensors and limitations in the current motion-tracking system.