Skip to content
HomeBlogTeensy 3.2 VS Arduino Due and Arduino Mega. Which one is faster? 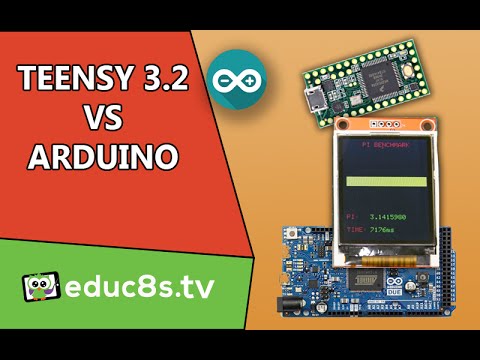 Teensy 3.2 VS Arduino Due and Arduino Mega. Which one is faster?

our friends at educ8s.tv wanted to test out how fast the  Teensy 3.2 is, so he build the project above.

I wanted to find out if Teensy 3.2, despite its small size, is faster than the Arduino Due, the fastest Arduino board available today. So I build a simple project where both boards run the same sketch, the Newton’s approximation of Pi for 500.000 iterations. Which one is faster? The board that finished first. Teensy or Arduino Due?

A few weeks ago, I published a video about the impressive Teensy 3.2 board! The specs of the board look fantastic! It uses a 32bit ARM processor that can run at 96 MHz and has plenty of memory for our projects. From the specs I thought that the performance of this tiny board would be similar with the performance of an Arduino Due which is the fastest Arduino board available today. But is that right? Let’s find out.

Teensy 3.2 VS Arduino Due and Arduino Mega. Which one is faster? – [Link]