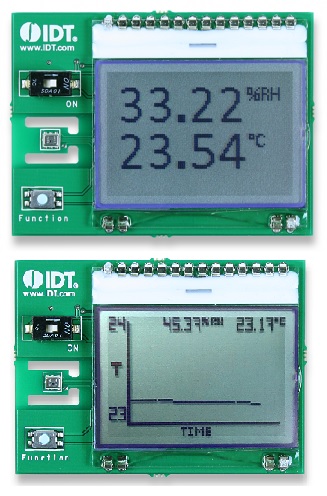 California based company, Integrated Device Technology (IDT) has recently announced their new HS300x family of MEMS high-performance relative humidity (RH) and temperature sensors of dimension 3.0 × 2.41 × 0.8 mm DFN-style 6-pin LGA. Currently, there are four devices in this family—the HS3001, HS3002, HS3003, and HS3004. They are all the same from the view of functionality but differ slightly in terms of the accuracy of their relative humidity and temperature measurements.

The highlighted feature of this new lineup is that they do not require any user calibration. HS300x family of ICs has calibration and compensation logic integrated into the devices. These ICs output their fully corrected data using standard I2C protocols making the measured data from the sensors is rather easy.

If you’re interested in testing these ICs prior to incorporating them into a design, SDAH01 or SDAH02 evaluation kit can come handy. Although both kits utilize the HS3001 sensor, the SDAH01 kit outputs the measured data to a PC while the SDAH02 displays the data on an LCD screen.