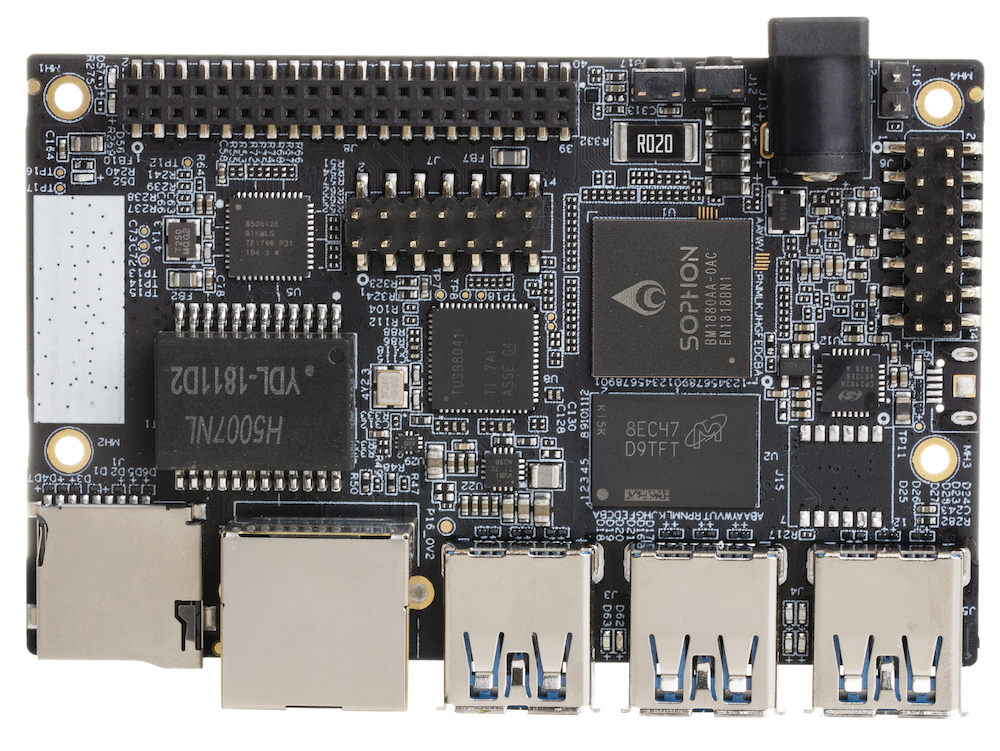 Bitmain has announced a “Sophon BM1880 EDB” 96Boards CE SBC which features their new Sophon BM1880 AI chip plus dual Cortex-A53 cores running Linux OS. Also available, are the RISC-V MCU and optional Raspberry Pi and Arduino modules. Popular for their vending of bitcoin mining chips and computers, they also have a “Sophon” AI chip business built around the BM1680 and more recent BM1682 Tensor Computing Processor (TPU) AI chips. The board is referred by 96Boards.org as the “Sophon Edge”. The Sophon BM1880 Edge which is an open spec Linux driven SBC will be available at the end of November 2018 for $129, but you can pre-order it now.

A BM1880-based USB stick and compute module were also announced, among other products. Bitmain joined the steering committee of Linaro’s 96Boards community. The SBC is the latest of Linaro’s family of AI-enabled 96Boards products. These include boards like the Sophon BM1880 EDB and HiSilicon Hikey970 that are fitted with neural network acceleration chips, as well as other boards without such accelerators such as the DragonBoard 920C and Rockchip Rock960, but can still be used for edge AI applications. The Sophon BM1880 EDB is referred to as the first ASIC-based 96Boards.ai product, despite the fact that the BM1880 TPU is an ASIC and not the dual 1.5GHz Cortex-A53 cores that accompany it.

The BM1880 TPU and the EDB boards are built for deep learning techniques, like facial recognition, object detection and recognition, license plate recognition and voiceprint recognition “in real-time on small devices without needing an Internet connection,” according to Bitmain. The BM1880 TPU gives a 1 TOP performance on 8-bit integer operations and up to 2 TOPS with Winograd convolution acceleration, according to Bitmain. The TPU has a scheduling engine, “which supplies extremely high bandwidth data flow effectively to all the tensor processor cores.” The chip incorporates 2MB of memory. The BM1880 is also available in the dual -A53 version, which allows it to be used as the main processor, or as a deep learning co-processor without the -A53 cores. According to Bitmain, the BM1880 can also receive video streams and image data from other hosts and then carry out inference and return the results back to the hosts.

The BM1880 TPU comes with a deep learning model compilers and an SDK. According to Bitmain, deep learning frameworks like Caffe, ONNX, Pytorch, and Tensorflow can be easily ported to the BM1880 platform. It also supports neural network models including CNN, RNN, and DNN. The company says EDB board can support ResNet50, Yolo V2, GoogleNet V1, MobileNet v1/v2, SSD300, Alexnet, and VGG16. Apart from its processors, the Sophon BM1880 EDB (Sophon Edge) board is quite a standard 96Boards CE SBC, except for the fact that it’s a headless board without video ports and lacks the usual 60-pin high-speed connector. The 96Boards compatible 40-pin connector is presumably where mezzanine boards can be added for the announced Raspberry Pi and Arduino development modules.

The board is a first of its kind, with a RISC-V companion MCU. The unidentified chip is presumably an MCU-like RISC-V part for real-time processing, probably designed by Bitmain. This is a high clock rate for an MCU, so it’s likely an alternative Linux chip in addition to the dual -A53 block. A boot switch is listed in the hardware manual that lets you switch between Arm and RISC-V for booting. The Sophon BM1880 EDB is fitted with 1GB LPDDR4, 8GB eMMC, and a microSD slot. The board offers GbE, WiFi, and Bluetooth for networking, as well as 3x USB 3.0 host ports and micro-USB and JTAG debug interfaces. Bitmain has also announced a USB-connected Neural Network Stick (NNS) implementation of the BM1880, which is much like Intel’s Neural Compute Stick and Google’s Edge TPU Accelerator. A 38 x 38mm Neural Network Module (NNM) based on the BM1880 is also available. Neither appears to offer the dual -A53 cores for independent Linux operation. Both need connected X86_64 computers running Ubuntu (NNS) or Ubuntu or Windows (NNM).

Specifications listed for the Sophon BM1880 EDB (Sophon Edge) include:

More information can be found on the 96Boards Sophon Edge page and Bitmain’s Sophon BM1880 EDB product page and you can pre-order for $129, with shipment due Nov. 30 2018