Adafruit has teased us with the announcement of the panel-mount TFT ESP32-S2 Wi-Fi Feather Board. It appears to be a succeeding version of the previous ESP32 Feather boards, by changing few positions of the components like the ESP32 module and USB-Serial converter, with the ESP32-S2-MINI module.

Apart from the NeoPixel in the schematic diagram, the STEMMA-QT header fits in the middle of the device. The four colorful dots indicate the vertical appearance of the connector. It serves the purpose of I2C as the larger JST PH connectors cannot fit on the compact feather board.

From the two Feather PCBs with ESP32-S2 SoC from the earlier devices, the panel-mount Wi-Fi Feather board has the TFT on the back and embedded with some tactile buttons. The TFT display makes the device quicker as it powers each pixel of the screen with a single MOSFET. TFT displays are mostly brighter than LCD displays.

From the Twitter handle of Adafruit Industries, it can be understood that the company has been working on all-in-one-device. Hence, including a TFT display and WiFi on a single feather board. The design process of the device had started at the time of the creation of PyPortals, which was around 2 years ago now.

The company says “It started designing a low cost ‘mini PyPortal’ that would be able to run CircuitPython similar to those lilygo all-in-one esp32+display boards, but it did not have circuitpython running directly on the original esp32” 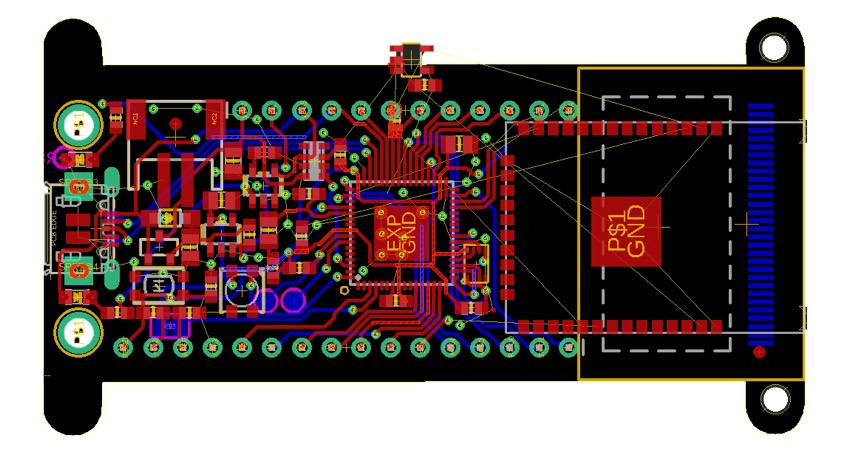 The Feather M4 was experimented with using “ ESP32 + OLED into a panel-mountable design”, but it took a lot of space hence defying the purpose of miniaturization. The enhancement in the TFT technology since then opened up the opportunity to build things in a new way.

TFT ESP32-S2 Wi-Fi Feather Board features LC709203F, which is a fuel gauge for a single lithium-ion battery. The HG-CVR algorithm removes the use of a sense resistor and gives accurate RSOC information even under unstable conditions. Also, the feather board comes with a Li-ion battery charger. “This single-chip device is able to keep tabs on the trickle of charge flowing in and out of lithium cell.”

The TFT ESP32-S2 Wi-Fi Feather Board is still in the development process. However, Adafruit has given the option of contributing suggestions and features that could be included in the device. For more updates check out the Twitter thread of Adafruit Industries. Images and technical specifications have been taken from the Adafruit blog and Twitter thread.