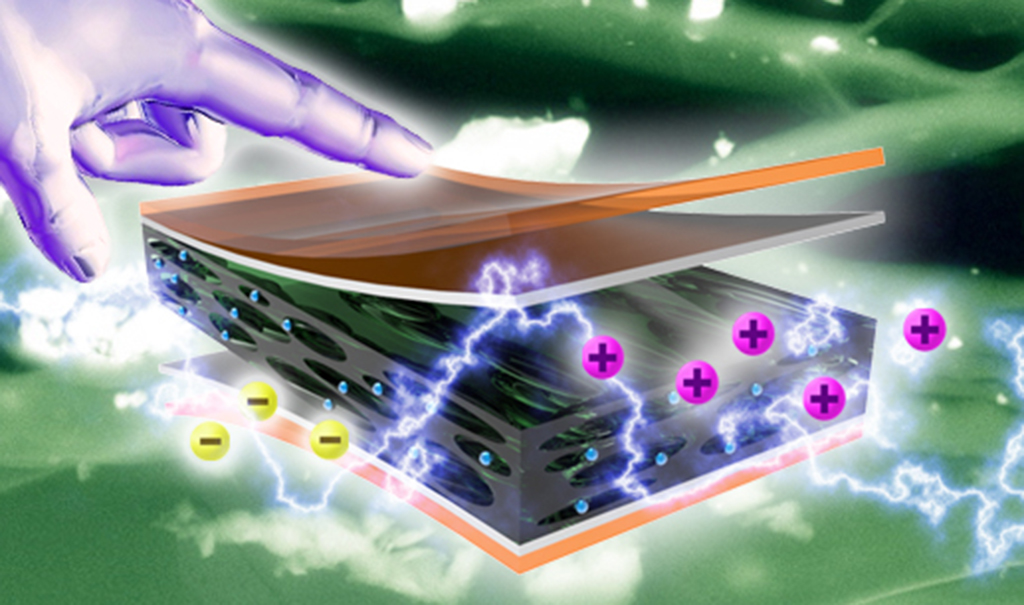 Michigan State University researchers have came up with a new method for  harvesting energy from human motion using nanotechnology. They designed a low-cost film-like device, a nanogenerator, than can power a LCD display,  keyboard, and some LEDs without any source of electric power, by only using some human touching or pressing.

This device called FENG, biocompatible ferroelectret nanogenerator, consists of several thin layers of silicon wafer made of environmentally friendly substances like silver, polyimide, and polypropylene ferroelectret – which is introduced here as the active material of this device. To add the electrical powering feature, researchers added ions to each layer to make sure that each layer has its own charged particles. Finally the circuit works only once some pressure or mechanical energy is performed on the device. For example, by using this technology you will be able to power the LED lights with the pressure of your palm, while the pressure of your finger is enough to power the LCD screen.

In this video 20 LEDs are powered with hand pressing:

Researchers’ investigations had shown that the voltage and current generated by pressure can be doubled if the device is folded, means a high-frequency pressure is already demonstrated.

“Each time you fold it you are increasing exponentially the amount of voltage you are creating,” said Nelson Sepulveda, associate professor of electrical and computer engineering and lead investigator of the project. “You can start with a large device, but when you fold it once, and again, and again, it’s now much smaller and has more energy. Now it may be small enough to put in a specially made heel of your shoe so it creates power each time your heel strikes the ground.”

Sepulveda believes that implementing this technology in real life will shift wearables to be completely powered by human motion. He and his team are working now on transmitting the power generated from the heel strike to be used for powering other devices like a headset.

In this video you can take a look at the flexible keyboard they designed:

This research was funded by the National Science Foundation. You can learn more about this project by checking the scientific paper, and the university official website.