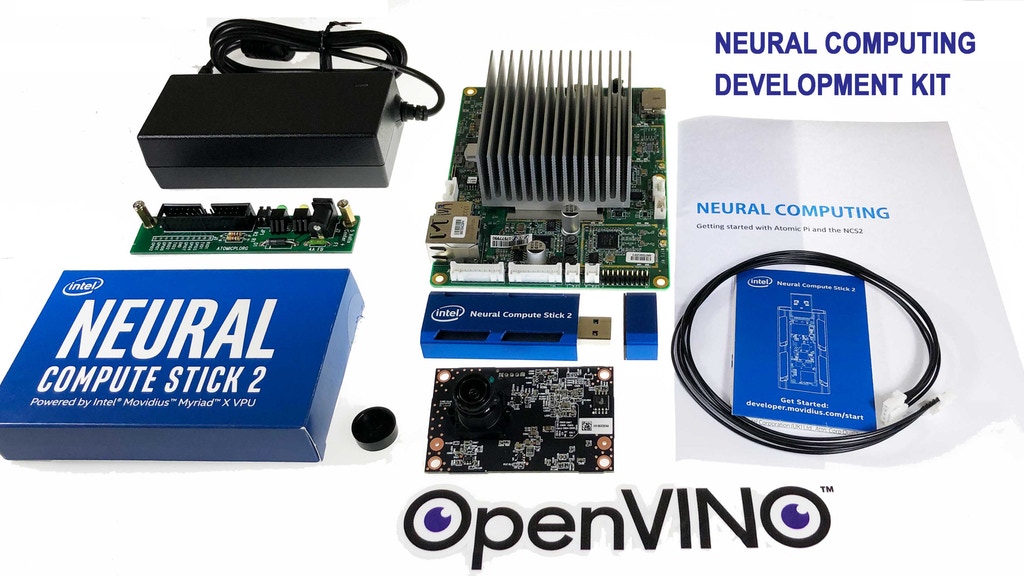 Following the success of their last product; the Atomic Pi SBC which sold for only $34 and sold out multiple times, Team IoT, has returned with another successful Kickstarter project for a Neural Computing Development Kit that combines the Intel Cherry Trail-based Atomic Pi SBC with a 2GB RAM and 16GB eMMC, with Intel’s Neural Compute Stick 2 AI accelerator (NCS2).

The kit which comes with Ubuntu and intel’s OpenVINO preloaded on the Atomic Pi SBC to save users some startup time, also ships with an unnamed machine vision camera, a small breakout board, cables, and a 5V 5A power supply, making the kit all users need to develop AI-based solutions, out of the box, especially with the fact that the preloadedOpenVINO deep learning toolkit already comes with patches and code samples with pre-downloaded and pre-optimized models.

The Atomic Pi SBC around which the kit is based is an impressive SBC especially considering the $33 price which makes it surprisingly cheap for an Intel processor-based SBC. While there have been several reports about few issues around the board in the past, most of those issues seemingly stemmed from users loading a Windows 10 on the board instead of Linux, and this makes good guessing ground for the reasons behind the board being preloaded with Ubuntu (on a lighter note). 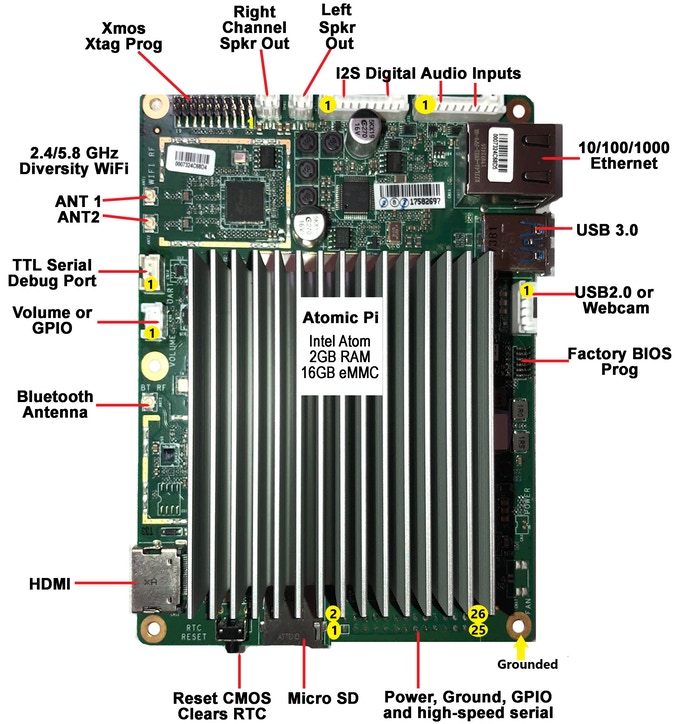 The embarrassing situations aside, the Atomic Pi is a rugged SBC, built around the Intel Atom x5-Z8350 Cherry Trail generation SoC, with 4x 14nm-fabricated cores clocked at 1.91GHz, which might be considered a “sell-off” product by many as Intel made a lot of them for an x86 smartphone wave that never hit and is the same SoC was used on Aaeon’s original, $99 UP board and DFRobot’s original $119 LattePanda SBC. The Pi maintains a 130 x 100 x 50mm form factor with a high profile that is a result of the huge heat sink slapped on top of the board. It is equipped with a gigabit Ethernet Port, WiFi-ac, Bluetooth 4.0, USB 2.0, micro-USB 3.0 OTG, and an HD-only HDMI port with audio output.  It also comes with a useful debug interface and a 9-axis IMU which might come in handy for certain projects.

Apart from the Atomic Pi, the other key element in the Kit is the intel Neural Compute stick 2 for which Intel is assisting the team with support. The compute stick 2 which was released on December 2018 is an impressive upgrade to the Stick 1. it features the latest, 1TOP (trillion operations per second) Myriad X VPU which offers up to 10-times the performance of the Myriad 2 VPU and according to Intel, is designed “for applications requiring multiple neural networks running simultaneously”.  The 72.5 x 27 x 14mm form factor NCS2 typically pairs with intel’s OpenVINO toolkit, offloading video processing for deep learning and freeing up the CPU for other tasks. It is connected to the Atomic Pi via the onboard USB 3.0 port.

Starting at $99 (for early bird), the team is set to begin shipping the complete kit by late October/November.

More information on price, Kit specifications, and shipping timelines can be found on the project’s Kickstarter page.