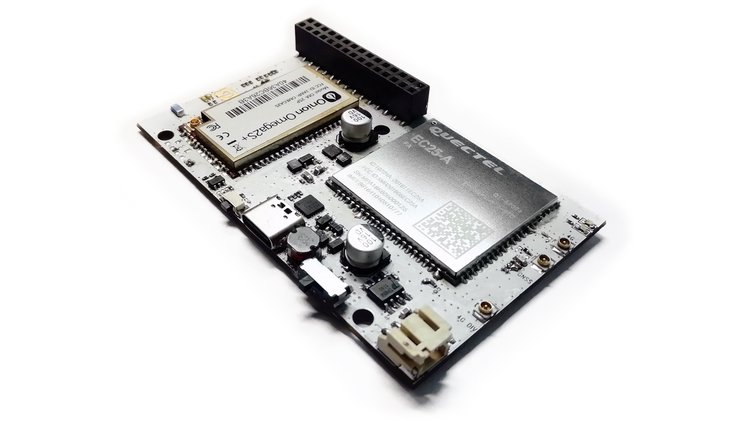 The Omega2 LTE is a Linux IoT computer with Wi-Fi and LTE cellular connectivity.

Effortlessly deploy your existing IoT applications in remote areas and no longer be limited by the range of Wi-Fi networks. The Linux network stack makes the switch between WiFi and cellular data seamless to user applications.

Take your existing NodeJS or Python IoT project outside the building with ZERO effort!

The Omega2 LTE has all the hardware you need for:

On top of that, the Omega2 LTE also has GNSS global positioning capabilities, further extending the possible use cases to include real-time asset and fleet tracking.

Omega2 LTE is a self-contained device that is smaller than a standard breadboard, making it a great form-factor for use in any IoT project. Just add LTE antennas and power.

It’s flexible when it comes to power: you can provide power from any USB port or with a LiPo battery. Connected batteries will automatically recharge when USB power is present, and will act as a back-up power supply if USB power is not stable.

Omega2 LTE is the latest addition to the Omega2 family and is based on the Omega2S module so it builds on all of the work we’ve done over the past three years since launching the Omega2. That means it’s an all-in-one device that features the standard Omega2 30-pin header, and it comes pre-loaded with the OpenWRT Linux OS. Also, it’s compatible with our existing eco-system of Omega2 Expansions. OnionOS provides an intuitive user interface through the browser with no installation required. Write code, run commands, and use apps to interact with your Omega2 LTE.

“Effortlessly deploy your existing IoT applications in remote areas and no longer be limited by the range of Wi-Fi networks. The Linux network stack makes the switch between WiFi and cellular data seamless to user applications.”

Key differences from the Omega2 Pro:

Onion is set to crowdfund the Omega2 LTE on Crowd Supply, however, launch date and price are not currently available.