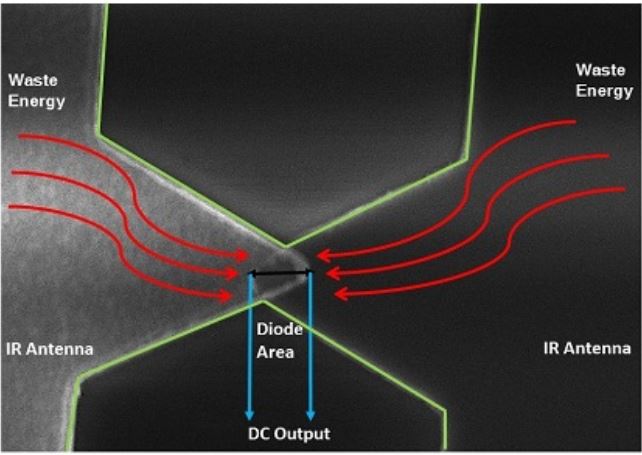 Unlimited Source of Energy- As good as it Sounds

In recent decades, humans realized that fossil fuels are a finite source of energy that not only pollutes the environment but is also difficult to extract (it can even be dangerous). Because of this, there has been a huge increase in the development of new ways to extract energy from other sources such as solar, wind, geothermal etc. Following this trend, researchers at King Abdullah University of Science and Technology have developed a diode that generates electricity using infrared energy.

Not all sources of energy have been exploited by humans, and infrared energy is one of them. This was mainly because of the small wavelength of these waves which made it hard to harvest energy. Unlike, solar power or wind, infrared energy can be harvested 24 hours a day because it does not depend on day and night or weather conditions, and unlike solar power it is not limited only to the visible spectrum.

The diode works by using a rectifier (semiconductor diode) to transform alternating signals received by special antennas into electric current. The diode will harvest infrared radiation and waste heat from industrial processes and does this by transitioning quadrillionth- of- a- second wave signals into useful electricity.

that’s why they decided to use quantum tunneling to solve the problem. They used a bowtie- shaped Nano-antenna holding the insulator film between two metallic arms to generate the fields needed for tunneling. One of the researchers mentioned that one of the biggest challenges was working in a nanoscale that require precise alignment for it to work.

These new methods might be still less efficient than fossil fuels, but with the development of the technology used they could improve and be just as efficient, or even more. Additionally, the energy provided by the device is clean and comes from a renewable source. Infrared radiation is emitted all around us at all times and its estimated to be millions of Gigawatts per second. The device has already been tested and it successfully harvested energy solely from radiation and not from thermal effects, and as the project leader said “This is just the beginning- a proof concept”.