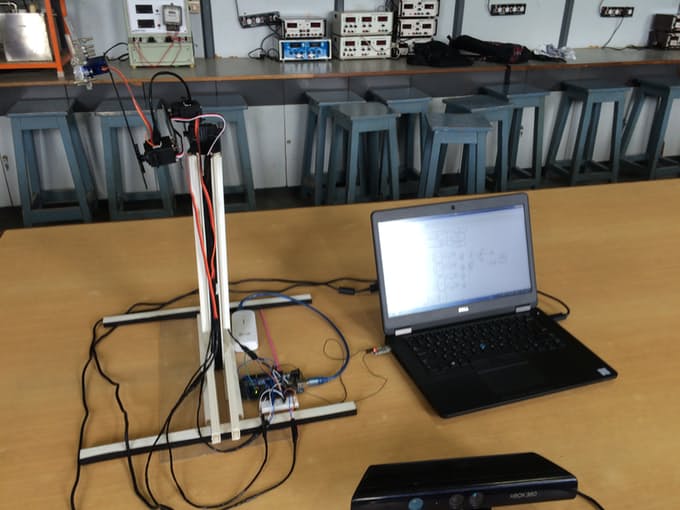 B.Avinash and J.Karthikeyan had developed a robotic arm that mimic their moves using a Kinect sensor with MATLAB Simulink and an Arduino. The arm was built based on servo motors that replicate the right arm shoulder, elbow and hand movements.

The Kinect sensor is a horizontal bar of motion sensing input devices which enable users to control and interact with their computers through a natural user interface using gestures and spoken commands.

Simulink is developed by Mathworks, and it offers integration with MATLAB environment, enabling developers to incorporate MATLAB algorithms into models and export simulation results for further analysis. Simulink is widely used in automatic control and digital signal processing for multidomain simulation and Model-Based Design.

To build a similar gesture-controlled arm you need these components:

Thanks to Simulink support for Kinect, the computer collects data from the connected kinect device and translates them into servo angles in MATLAB. These angles are sent to the servos through the arduino via TTL device, resulting movement of the arm with a slight delay.

Arduino code, other files and resources are reachable at this instructable and this hackster.io page.

Excellent blog! I really appreciate the blog. It is very helpful for the beginner’s, Please keep sharing. I look forward to read more on this.