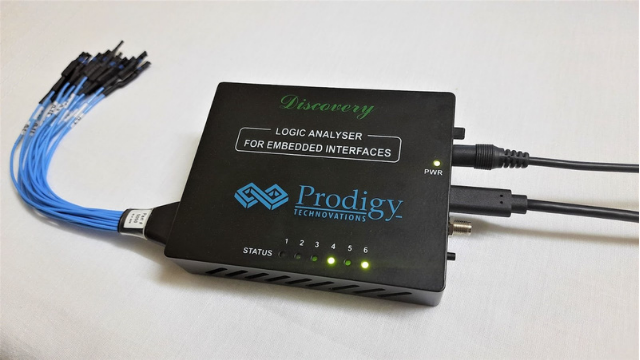 Since its introduction in 1973 by Hewlett Packard, Logic Analyzers have been one of the most important tools in an engineer’s toolkit. Logic Analyzers enable us to easily debug digital logic signals by capturing the data and plotting it in a time-view format. They serve a similar purpose as an oscilloscope, which is a tool to view analog waveforms. With the advancements in technologies, circuits are becoming much faster and more complex and thus require a high sampling rate to be debugged properly. This created a demand for easy-to-use Logic Analyzers with high speed and low cost, giving rise to surprisingly good USB-based analyzers. In this article, we’ll have a hands-on look at one such Logic Analyzer from Prodigy Technovations, which can provide 1GS/s sampling speed that too on all of its 16 channels.

Prodigy Technovations, the leading provider of innovative protocol analysis solutions, designed and manufactured the Logic Analyzer for Embedded Interfaces. Also identified as PGY-LA-EMBD, these Logic Analyzers can even work as a Protocol Analyzer or both simultaneously. So let’s jump into the review now. 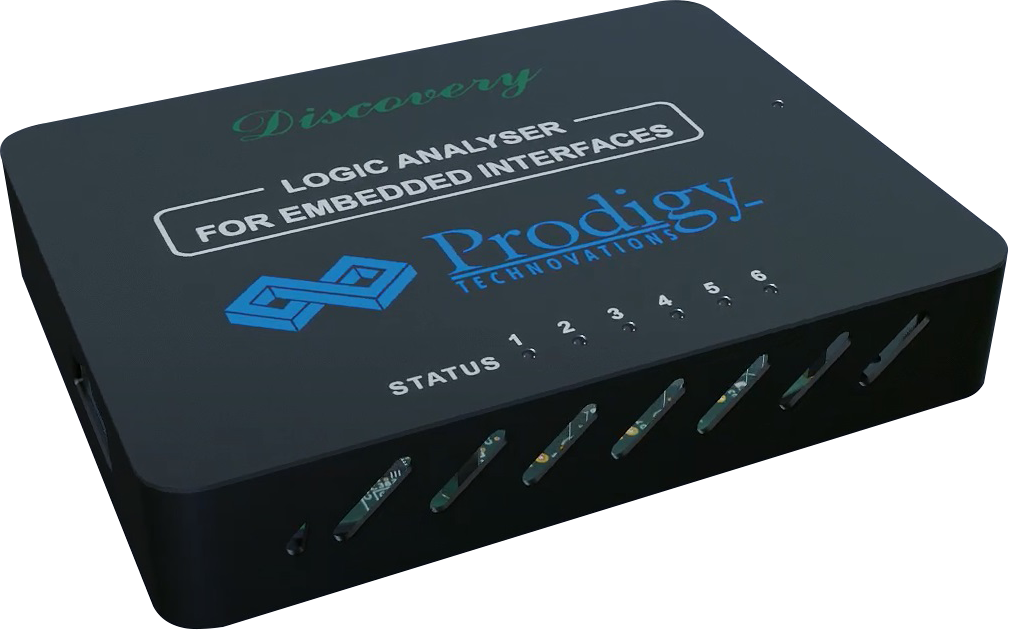 Accessories in the box and build quality

The packaging was quite well done, with all the electronics placed inside anti-static plastic bags. There were a total of five components, including the Logic Analyzer. The very first thing we get our eyes on is the custom 16-channel flying lead probe cable. There are 16 pairs of wires, each pair consisting of a digital wire and a ground wire. The cables are labeled with their corresponding channel number, which is very convenient while connecting to the interface to be debugged. The cable is well insulated with heat shrinks at every pair and surely comes under high quality. Next, we get a C-Type USB cable that is noticeably thicker than the normal ones and a 12W 5V DC power adapter to power the device. In addition to the above, there was also a CD with a software setup and user manual in it. 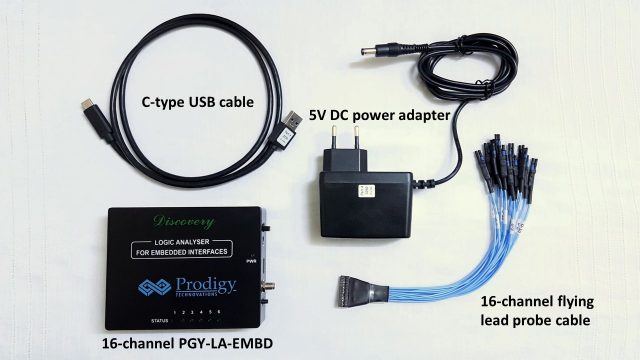 Talking about the build quality, the housing is a complete metal body, giving it an excellent and robust look. The surface has a nice black matte finish along with the company’s branding on the top. The grills at the front and backside help with cooling and adding to the aesthetics of the device. There are four flat rubber legs at the bottom at each corner, which gives it a little elevation and insulation from the working surface. The PGY-LA-EMBD is compact enough to fit in your palm with a dimension of 140 x 100 x 35 mm. Overall, the build quality of all the accessories and the Logic Analyzer feels very durable.

PGY-LA-EMBD comes with a 1GS/s (or 1GHz) asynchronous timing speed and 100MS/s synchronous state speed. Discovery series logic analyzers can perform simultaneous protocol analysis of I2C, SPI, UART, I3C, SPMI, and RFFE interfaces on all the 16-channels in embedded system designs. It comes with an input buffer of 4GB DDR3, which is plenty for storing captured data. There are also some advanced trigger capabilities, including auto, pattern, protocol awareness, and timing.

The supported voltage levels are 1.2V, 1.8V, 2.5V, 3.3V, and 5V, selected in the software tool. There are six green LEDs at the top, which indicate the working status, and a PWR LED to indicate the power ON status. An external trigger can be given using the Trigger Out SMA connector on the right side. Additionally, there’s a USB 3.0 port, 5V power port, an ON/OFF switch, and a reset button on the right side. There are two micro-USB ports on the left, a 14-pin connector that is said to be reserved, and a connector for flying lead cable.

Test setup: ESP32 is connected to a BMP280 sensor via I2C

To try out the Logic and Protocol Analyzer modes of PGY-LA-EMBD, I decided to build a setup that would be simple and, at the same time, will operate somewhat at a frequency of 300KHz. My setup consists of an ESP32 DevKit v4 hooked to a BMP280 temperature and pressure sensor via I2C. The ESP32 acts as a master, whereas the sensor acts as a slave. I will try to sniff the Serial Data (SDA) and Serial Clock (SCL) lines while the sensor sends the data. 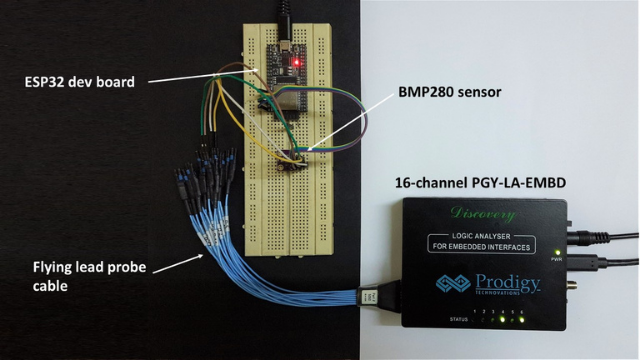 Once the Logic Analyzer is connected to the PC through a USB interface, the software handles the rest of the work of analysis and data representation. The setup is around 14MB which, after installation, takes up to 50MB of disk space. So, it’s lightweight software, which, when opened directly, greets you with the Logic Analyzer setup page. After clicking the “Connect” button, a message displaying “Device connected” pops up, and we’re now ready to capture signals. I selected the Logic and Protocol Analysis mode, a sampling rate of 500MS/s, I2C as the protocol, and finally, channels 1 and 2 as SDA and SCL, respectively. 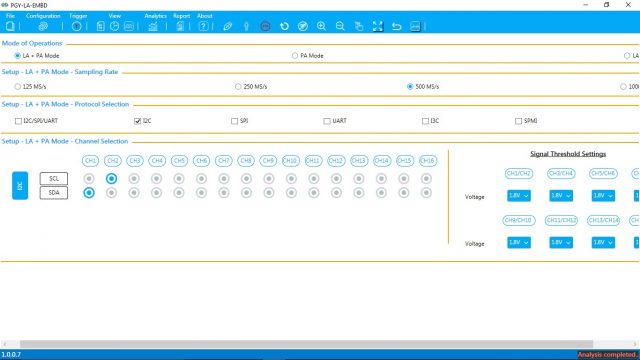 We need to click the Acquire button with the setup done and the Logic Analyzer will start capturing data. On the Logic Analyzer, LED 1 will now start glowing, indicating that the capture has started. Simultaneously, the software will keep on displaying the acquired data, so you won’t have to wait until the end to get the results. The data will keep on streaming to your PC until you click on the Stop button. LED 1 will be turned off and LED 4 will glow, indicating that capture has stopped.

After capturing the signals, the PGY-LA-EMBD software tool provides a total of three options for viewing – Protocol View, Timing View, and Logic View. Protocol View provides decoded packet information and error information, if any, along with a bus timing view at the bottom. Timing View gives in-depth insights about timing information. Logic View displays the actual state of signals, i.e. High or Low, in a time-correlated format. The interface should be quite familiar if anyone has used a Logic Analyzer before. 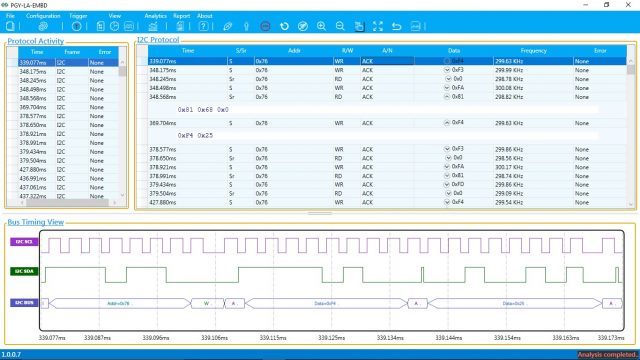 If we look into the table, the 0x76 in the Addr column is the I2C address of the BMP280 sensor. We first wrote a value of 0xF4, requesting the sensor to give out the readings. The sensor acknowledges the ESP32, which can be seen as ACK under the A/N column. After that, the sensor writes out 0x81, 0x68, and 0x0, representing the raw readings coming straight out of the registers in the sensor. Even the waveform at the bottom shows what type and value of data were transmitted at each instance of time.

To sum up, the whole process of getting started with the PGY-LA-EMBD Logic Analyzer and capturing the data did not take much time; in fact, writing this article took a longer time than this. The labeling on the probe cables helped a lot as normally I would check the connections 3-4 times to make sure nothing is wrong. The software GUI is pretty straightforward and displays all the important stuff on a single page.

While operating, the PGY-LA-EMBD Logic Analyzer does heat up a little bit, and it is more noticeable with the full metal body. However, it is not a major concern as the grills on the front and back dissipates the heat passively. For an end-user, the hefty price tag of $1500 of the PGY-LA-EMBD can be justified with a trove of features. This includes 1GS/s sampling speed, support for I3C, RFFE, and SPMI protocols through a software upgrade in the future (field upgradable), offline decoding capabilities, and also Python API support. So, it can be termed as a future-proof product and seems to be worth investing in.

You can learn more about PGY-LA-EMBD Logic Analyzer on its product page or request a demo before buying one.