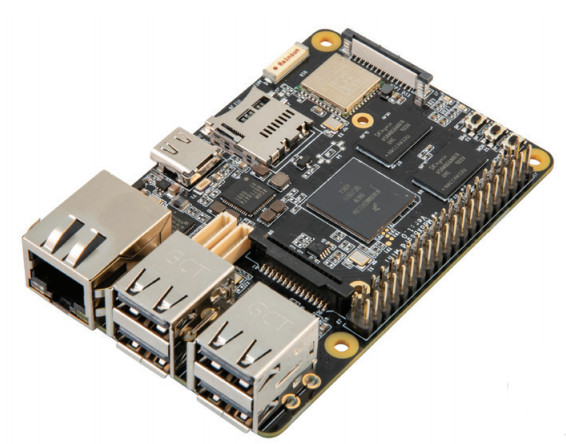 Avnet’s NXP i.MX 8M Mini SBC seems very familiar if you ever seen a Raspberry Pi, as their I/O looks rather similar at first glance, but is it more than that? Actually, yes.

MaaXBoard Mini is a single board computer based on the NXP IMX8M Mini SOC series, designed by Avnet Manufacturing services. From the outside, it comes at a compact size with some interesting peripheral interface options, such as Gigabit Ethernet, USB 2.0 host, MiPi-DSI, MIPI-CSI, Micro SD card, Wi-Fi, Bluteooth and GPIO. Regarding the hardware, it’s based on the NXP’s first embedded multicore applications processor, which is built using the advanced 14LPC FinFET process technology, a 14 nanometer fabrication process, providing more speed and improved power efficiency over its predecessor, the i.MX 8M. However, it comes with a more limited feature set than the earlier-released MaaXBoard, where the MIPI-DSI is preffered over HDMI, leaving you with a smaller resolution of 1080p at 60fps instead of the 4K 60fps, paired with a different GPU, the 4GB DDR4 is downgraded for a mere 2GB, are some of the most noticeable changes.

As software is concerned, you can be assured of Android 9.0 and Linux (Yocto and Debian) support, containing an interesting amount of documentation to work with each of them.

Some of the possible applications for this SBC are family entertainment systems, HMI interfaces, computer vision, and other AI and imaging projects. It comes at a cost of $72.50.

What do you think of this board? Is it just a lookalike of the Raspberry Pi for you? My opinion is that it’s quite a bit more than that, justifying the higher price tag with faster hardware and more interface options.