The gen4-4DPi range of LCD (Liquid Crystal Display) touchscreen modules was recently released by 4D Systems. The modules support the Raspberry family of single board computers (SBCs), which means that the modules work with all versions of the raspberry that supports the 40-pin header which includes Pi A+, B+, Pi2, Pi3, Pi3B, Pi Zero and Pi Zero W. The display will serve as the primary output of the Raspberry Pi, and they come in three different screen sizes which are 4.3-inch, 5.0-inch and a 7.0-inch.

Projecting from the Raspberry Pi has mostly been with the use of the HDMI connection to an external monitor or through the official Raspberry pi touch display which comes only in 7-inch display size and supports 800 x 600 display resolution. The 4D System is expected to provide different display size options to the user. The 4.3 sized screen has a 480×272 resolution while the 5.0 and 7.0 screen sizes have an 800x480 resolution.

The communication between the gen4-4DPI display and the Raspberry Pi is through a high speed 48MHz SPI connection which is made possible by an onboard processor and also features a customized DMA enabled kernel, a combination that allows the display to output high frame rate as compared to other SPI display solutions.

The following are some of the features of the Gen4 Displays

The Gen4 Display comes in six different variants as shown below: 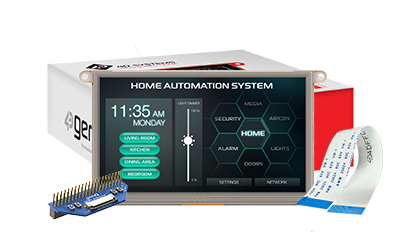