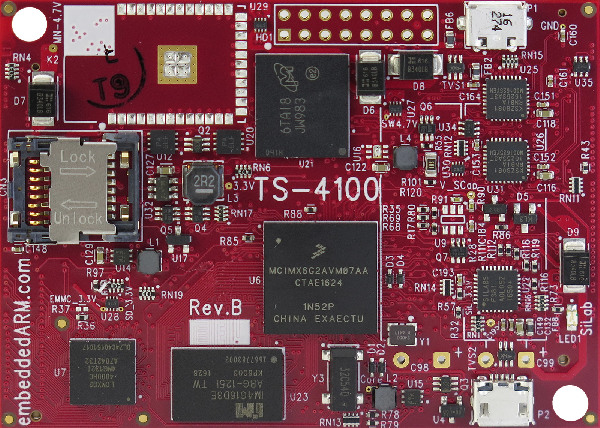 Technologic Systems has begun testing its first i.MX6 UL (UltraLite) based board, which is also its first computer-on-module that can work as a single board computer. The footprint of 75 x 55mm TS-4100 module features a microSD slot, onboard eMMC, a micro-USB OTG port with power support, and optional WiFi and Bluetooth. This board offers long-term support and a temperature operating range of -40 to 85°C, and ships with schematics and open source Linux images (Ubuntu 16.04 and Debian Jesse).

This board contains a low-power (4k LUT) MachX02 FPGA from Lattice Semiconductor. Technologic has improved the FPGA with an open source, programmable ZPU soft core that provides support for offloading CPU tasks as well as harder real-time on I/O interactions. The 32-bit, stack-based ZPU architecture offers a full GCC tool suite. In this implementation, it’s imbued with 8K of BlockRAM, which can be accessed by the i.MX6 UL, and has full access to all FPGA I/O.

The low-power i.MX6 UL and its power management IC are utilized to provide an efficient 300mW typical power usage. The module is equipped with 512MB to 1GB DDR3. The specification list concludes only 4GB MLC eMMC or 2GB of “robust” SLC eMMC as options, but the block diagram suggests you can load up to 64GB eMMC.

The TS-4100 is equipped with a pair of 10/100 Ethernet controllers plus LCD and I2S interfaces for media connectivity. There are also several serial and USB interfaces along with the micro-USB OTG port. Other interfaces are listed as an accelerometer, gyro, SPI, I2C, and PWM and 2 separate CAN buses.

Key specifications for the TS-4100: