Skip to content
HomeSBC-SiP-SoC-CoM1.7K Voters Choose From about 100 SBC’s — The Results of Linuxgizmos 2017 Survey

Each year, Linuxgizmos does a survey about Single Board Computers (SBC) to find out how many of hackers and makers are using each of which . The results this year show apparently, the domination of Raspberry Pi 3 over the other 97 boards by a proportion of 4-to-1. Raspberry Pi 3 was launched in the first quarter of 2016 and brought some enhancements to RPi2 especially in the CPU side which was 300 MHz faster than the RPi2 one, and an updated ARM architecture: Cortex-A53.

Dozens of RPi-like clones where on the 98 list of SBCs. Only one has a good result; The Odroid-C2 was in the top 10.

Chinese cheap SBCs like Orange Pi and NanoPi Neo, the 8$ SBC,  which are among the leaders in price and performance on paper had poor results — Orange Pi Zero was in the 28th place and the 31st was for NanoPi Neo.

Even that the most used CPU architecture in the hobbyists’ SBCs is ARM architecture (83 of the 98 boards in Linuxgizmos catalog are ARM based), the list also has eight x86-based boards and seven MIPS-based boards. However, Udoo x86 came in the sixth place, and Aaeon’s Intel Atom based UP Squared came in the 13th.

Last but not least, the results of this survey seem to be North America- and Europe-centered as shown in the following diagram. The centric results have some logical explanation. The folks behind linuxgizmos said that SurveyMonkey is blocked in China,the biggest Asian country. Only eight respondents came from China. 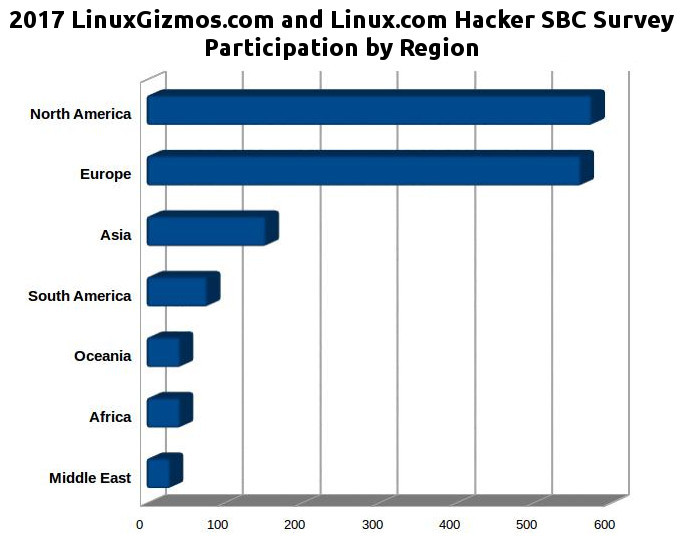 To see the full report, please refer to linuxgizmos website, and you can see the linuxgizmos list of 98 SBCs with specs. A table of all SBC scores is available also.