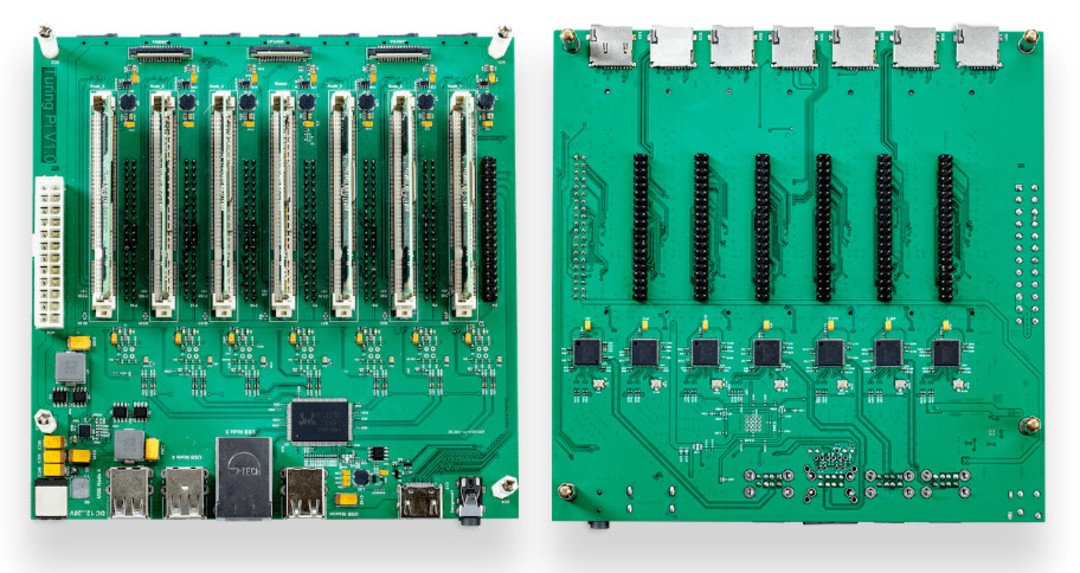 The Turing Pi Clusterboard takes a step further for those wanting more performance by stepping the cluster computing game to provide support for up 7 Raspberry Pi compute modules. Based on the Mini ITX-sized boards, the Turing Pi Clusterboard allows a user to connect up to seven Raspberry Pi Compute Modules and is being advertised for applications that support Docker, Machine Learning, Kubernetes, Apache Spark, and similar applications, also including  serverless stacks.

The 7x Raspberry Pi Computer Modules are connected via a 1Gbps Ethernet network, making it possible to run cloud-based applications on edge. A good thought will be to try the Jetson Nano’s on the Turing Pi Clusterboard, but sadly, that doesn’t seem possible since the Jetson nano is a DDR3 form factor, and the Computer module are DDR2.

Measuring around 170 by 170mm, the Turing Pi features DDR2 style sockets, seven MicroSD card slots which is meant for each compute module, an HDMI port, Gigabit Ethernet port, MIPI DSI connector, 8x USB ports. You also have a 3.5mm audio jack, provision for a dual MIPI-CSI connector if you are interested in adding some cameras. Each cluster slot has its 40-pin GPIO port for extending the compute module functionality. The board provides a power supply jack through a 12V-20V DC jack or an ATX power supply.