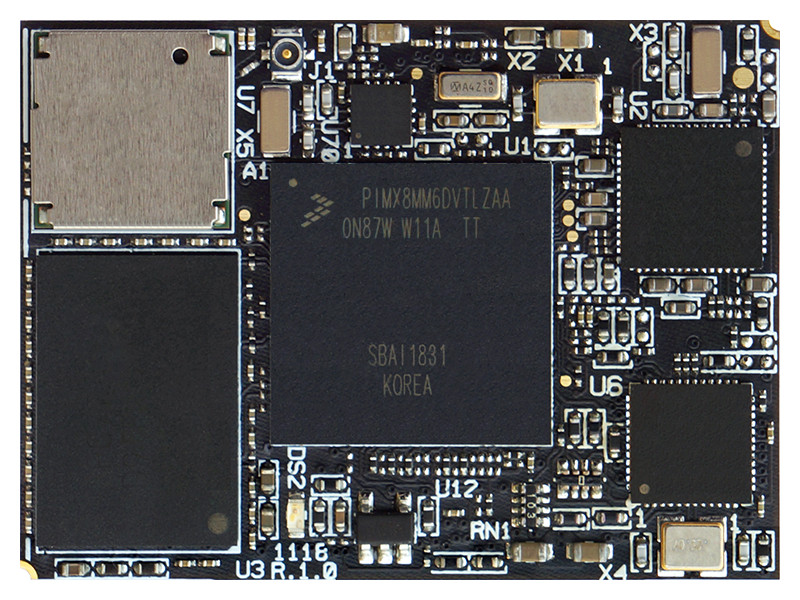 CompuLab has unveiled its UCM-iMX8M-Mini computer-on-module with NXP’s new i.MX8M Mini SoC. The Linux-driven, 38 x 28mm module features i.MX8M Mini, WiFi/BT, and up to 4GB RAM and 64GB eMMC. The COM also ships on a sandwich-style “SBC-iMX8M-Mini” SBC. The company aims to apply its new module for applications like professional handheld devices, autonomous drones, and wearables (medical and nonmedical).

The device is available in 0 to 70°C, –20 to 70°C, and b versions, and offers 50g/20ms shock and 20G/0-600Hz vibration resistance. The UCM-iMX8M-Mini supports a Dual, DualLite, and Quad version, clocking to up to 1.8GHz. An HD-ready, 2D/3D GC NanoUltra GPU and a Cortex-M4 core are available, which is listed by other vendors at 400MHz. This is faster than the usual 266MHz MCUs present in other i.MX SoCs. The COM  dual 100-pin connectors feature 2x USB 2.0 OTG, 4x UART, 3x SPI. 3x I2C, 4x PWM, up to 85x GPIOs, single MMC/SD/SDIO and PCIe Gen 2.1. Media connectivity features include HD-ready MIPI-DSI along with capacitive touch support and a 4-lane MIPI-CSI interface. Audio features include up to 3x I2S/SAI plus SPDIF I/O. The module features a 3.45V to 4.4V supply voltage and 3.3V I/O voltage. It ships with an RTC and a JTAG interface.

The UCM-iMX8M-Mini module offers 1GB to 4GB LPDDR4 and 4GB to 64GB eMMC. An optional GbE controller (MAC+PHY), and an optional pre-certified BCM4335 wireless module with 802.11ac and Bluetooth 4.2 BLE are available. Full BSP and ready-to-run images for Linux and Android are provided for the UCM-iMX8M-Mini.