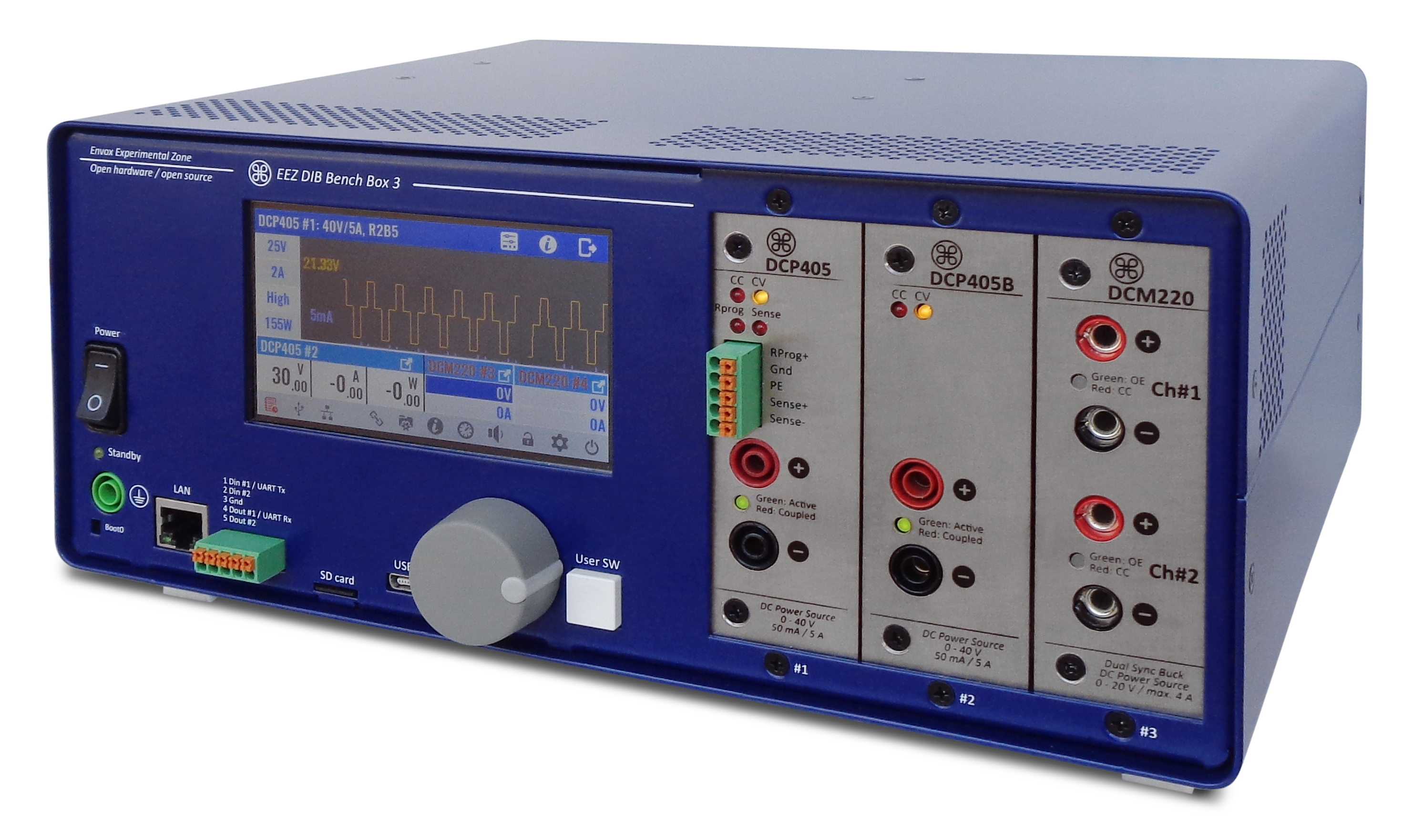 EEZ teams recently announced their latest project; the EEZ Bench Box 3 (BB3). The Bench Box 3 which is a FOSS and open hardware programmable power supply concept was designed to serve as a successor to EEZ’s H24005, with the aim of providing a power supply with better modularity, higher capacity, and functionality while preserving openness, and rich software support, all at a reasonable level of complexity so it can be built by anyone with intermediate electronics and soldering skills.

The BB3 comes with increased capacity compared to the h24005, starting from the color TFT display. The EEZ H24005 is one of the first programmable power supplies to incorporates color TFT touchscreen display but the BB3 not only also comes with a TFT display, it comes with an even larger display (4.3” 480×272 pixels) with antialiased fonts and larger menu options area improve legibility and simplify interaction. The touchscreen convenience on the BB3 is further expanded with accompanied incremental encoder that can be used for functions that are traditionally performed with push buttons or rotating knobs (e.g. changing output parameters).

The BB3 also comes with a larger number of modules (three instead of two) compared to the H24005 and is available for both single and dual-channel modules which allows configurations with up to six power outputs. The design of the BB3 was done with modularity in mind to allow easy upgrades in the future via the introduction of new peripheral modules to provide various functionality to users. Howbeit, it initially offers three different type of peripheral modules that can serve various user needs at varying budgets. 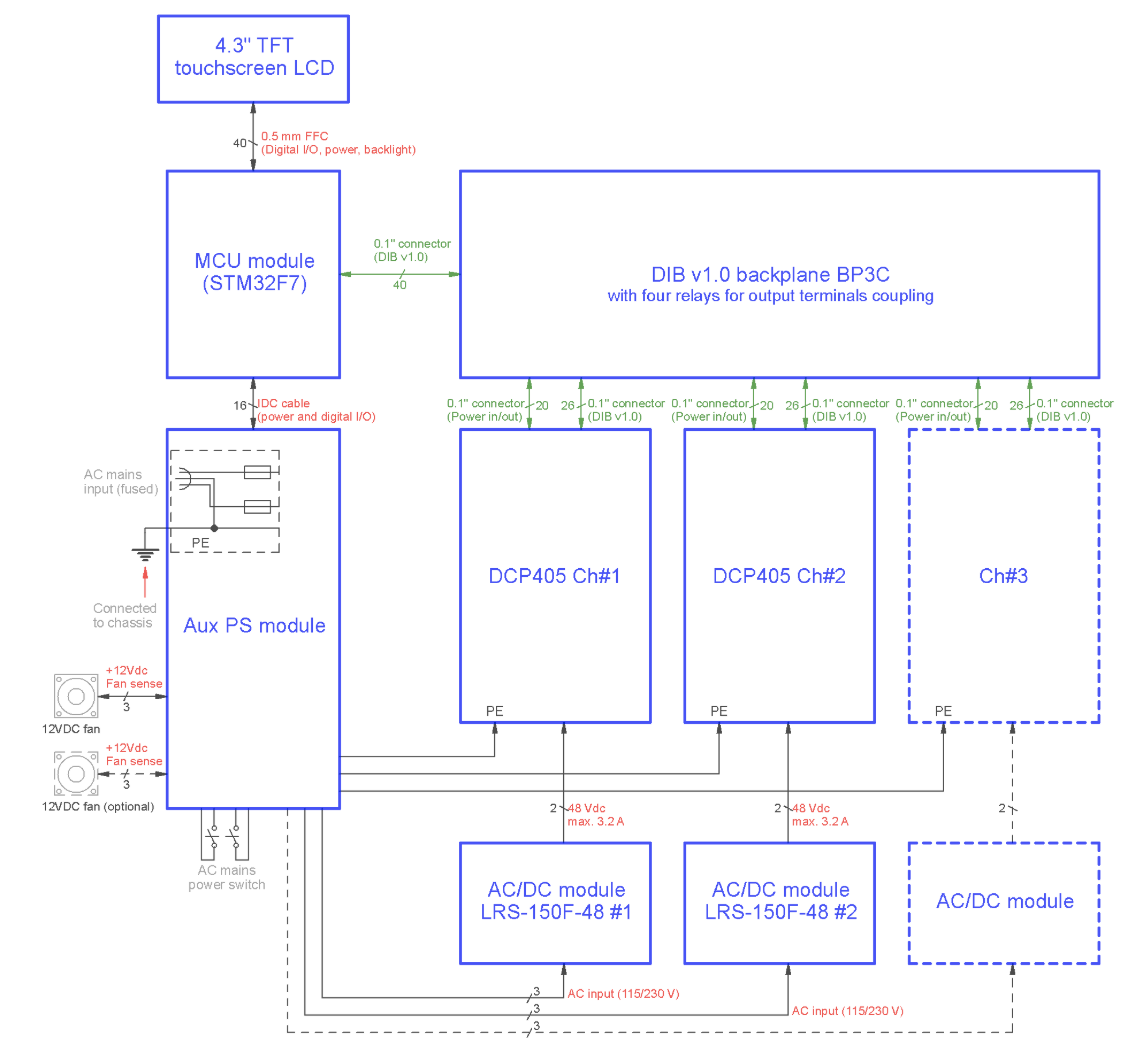 Modularity which is one of the key/interesting features of the BB3 was accomplished using the EEZ DIB (short for DIY Instrument Bus) concept created by the EEZ team. Currently in its first version, the DIY Instrument Bus(DIB) concept offers a simple way of interfacing a “master” module with up to three peripheral T&M modules connected via separate (dedicated) SPI buses. The master module is CPU-agnostic, therefore any MCU, CPU, FPGA, SoC, etc., with SPI capability can be deployed as main processing resource. The peripheral modules in the DIB concept are allowed to have there own EEPROM to store peripheral specific data and on-board processing resources that communicate with the master module. More on the DIB can be found on the project page.

The EEZ team’s plan is to design new modules alone or in cooperation with other teams that already successfully launched open hardware T&M devices. The new 2-quadrant and 4-quadrant power modules can be expected in the near future but planned functionalities go beyond DC power modules with the introduction of a power analyzer, signal/function generator, data acquisition module, thermal sensor module, stepper/DC motor controller, I/O and switch matrix, and much more. The initial investment in the BB3 will be preserved and the same is the case with accompanied software and firmware features.

Openness and rich software suite is a distinguishable feature of all EEZ projects. The BB3 comes with feature-rich software and firmware, and some unique features of the EEZ software suite introduced with H24005 project, including; the fully featured simulator, in-house developed visual editor, SCPI controller/console, and TFT MHI, are also available for use with the BB3.

The simulator which runs as  web application, allows the exploration of all firmware features and others like assigning virtual load on the module power outputs even when you don’t have a physical device at your disposal.

The visual editor is a part of the cross-platform EEZ Studio that enables the rapid development of HMI for the BB3 color TFT touchscreen display. The EEZ Studio is capable of generating source code that can be directly imported into a firmware project and compiled (e.g. free ST Atollic TrueSTUDIO or STM32CubeIDE). 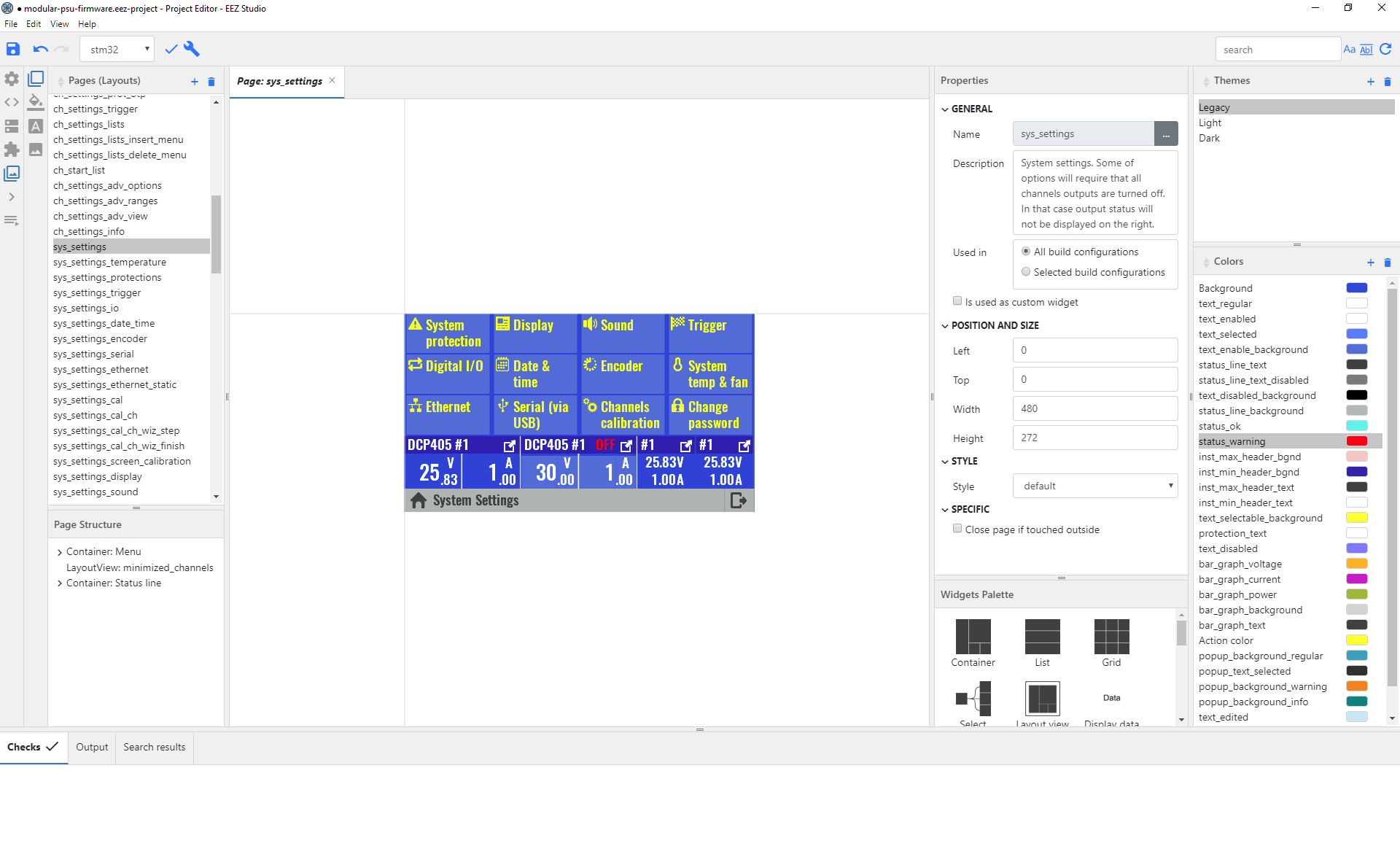 The other part of the EEZ Studio is the SCPI controller application that allows users access BB3 in an intuitive way using the simple text-based SCPI commands. Leveraging on the capacity of the SCPI controller, the EEZ Studio facilitates fast and accurate collection of data like; the instrument’s screen data, logged data, control of inputs and outputs, parameter settings. Each instrument has it’s own “session window” and all interaction are stored in SQL database for efficient searching, presentation and archiving.

The BB3 displays continuity of the practice of the EEZ team to design their devices in a manner that ensures it can be easily replicated by DIYers/makers with intermediate skills in soldering, assembling, testing and have basic understanding of software and firmware installations and uploading. Although it includes custom made enclosure, builders have a freedom to make his/her own enclosure or adopt some general purpose enclosure of similar dimensions.

In line with EEZ team’s open source policy, the project is open source and the Schematics, Gerbers, mechanical drawings, BOM and code are  all available on the Project’s GitHub repository, and are offered under TAPR license. Components used in the development of all the modules used in the BB3 are readily available from major suppliers and ordering codes for five different sources are added for every component in the BOM to make it easy to purchase them. Components in packages that require additional assembly equipment and skills (e.g. QFN, BGA) are omitted.

The  EEZ team is in the final stage of preparations for a crowdfunding campaign for the BB3 Project. The campaing will offer the BB3 in a highly completed and tested (Almost-Ready-To-Run) Kit form and backers will be able to choose between multiple configurations starting from bare PCBs set, custom enclosure to the fully-featured configuration with multiple power outputs.

The EEZ team also told us that they’re working on fully assembled, tested and calibrated solution that is expected to be ready for shipment next year with required certificates for the EU and the US markets.