Skip to content
HomeBlog Meet the new Arduboy Mini, the size of a coin pocket

Meet the new Arduboy Mini, the size of a coin pocket

The Arduboy Mini is a brand-new handheld gaming system that can be backed on Kickstarter. It is designed to fit into the coin pocket of your jeans, and it is available for purchase there. The layout of the Game Boy served as inspiration for the design of this diminutive gaming console, which serves as a sequel to the original Arduboy. A system that was initially introduced in 2016 by its designer, Kevin Bates, in a somewhat expanded version. Despite its little size, this handheld gaming device has many of the same advantages as the bigger Arduboy, such as an OLED display, hundreds of open-source games, and an exposed design that invites users to explore hardware hacking and coding.

A tiny OLED display and an Arduino board are used in the construction of the Arduboy Mini, just like their predecessor. In addition, there are buttons for controlling the games, and a charging port may be found on the underside of the console. A portable battery that is linked to the Arduboy Mini’s USB-C connector can be used to provide power to the device. Having said that, it is most certainly not a fully functioning console as a result of the fact that it does not contain a few of the components that one would anticipate discovering on a mobile gaming system. However, that is not necessarily a negative thing at all. And the way that it was constructed was done so for a specific reason. 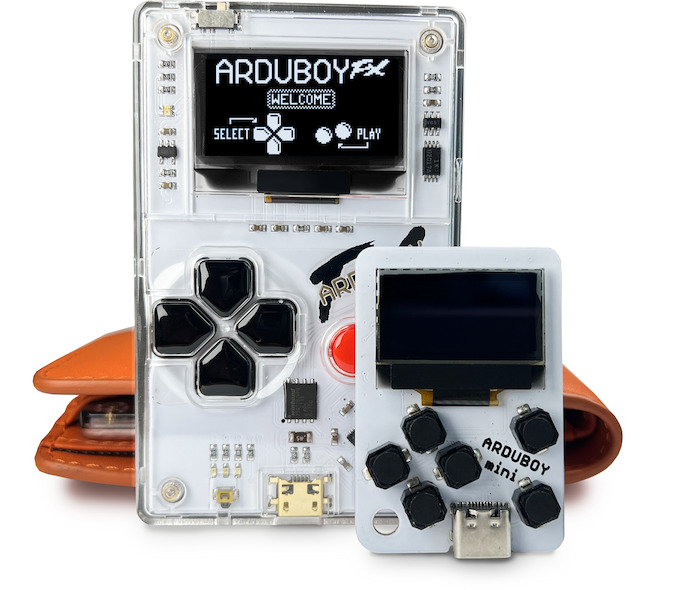 The Mini has a monochromatic OLED display with 128 by 64 pixels, a 16MHz ATmega32u4 processor, and a total of six buttons, four of which are arranged on the front left side of the device like a directional pad, two of which are located on the right side and can be used as action buttons while playing games. A seventh button that may be used to reset the console can be found on the back of the device, where it is likewise situated. The tiny console comes with a library of over 300 games inspired by the 8-bit era of video games, all of which are open-source and were developed by a community of committed game developers. To keep the gadget powered, you will only need to insert a cable that uses the USB-C standard. It comes preloaded with more than 300 games, all of which may be played on the OLED display, which has a resolution of 128 by 64 pixels with a total of six physical buttons located on the front panel for use in managing controls. The controls consist of two action buttons and four that are arranged in the shape of a pad.

In addition, there is a button on the back that can be used to reset the system. This appears to be essential in order to participate in a different game. Because the Arduboy Mini only supports 8-bit games, the gameplay mechanics of such games should be expected to be rather straightforward. If you are a fan of classic video games, this fact should not deter you from enjoying the excitement that may fit in your pocket. On the Kickstarter page for the device, you will see the option to purchase an Arduboy Mini for the price of $29. It is anticipated that units will begin shipping in June of 2023.