9 August, 2018
5.227
Views0 Comments
The Exen Mini was categorized as one of the world’s smallest 32-bit Arduino compatible boards that was launched by Nerdonic, although the board was able to get the job done in some areas it still had limited capacity, it had only 8 I/O pins. Based on the success and limitations of the Exen Mini, Nerdonic has launched a new similar board, but with improved I/O options called the Exen Proto.
Just like the Exen Mini, the Exen Proto is based on Microchip SAMD21 Cortex M0+ microcontroller allowing projects previously built for the Exen Mini board to easily migrate to the new board. 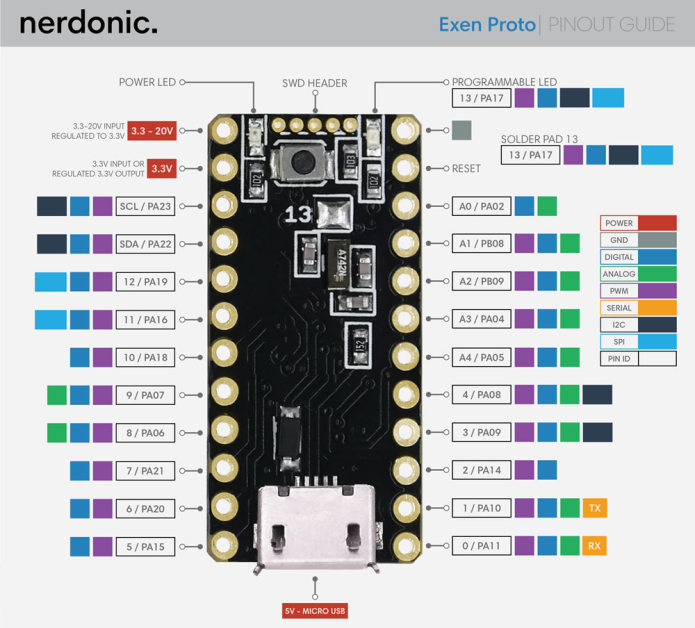 The board can be programmed with the Arduino IDE thanks to the pre-flashed Arduino Zero bootloader . The Exen Proto board is expected to come with some add-ons board or shields like a Li-Ion/Li-Po charge and discharge shield that can be charged by either the power pin or the USB port on the Exen Proto.

Below are some of the specifications for the Exen Proto board:

The Exen Proto board is currently being crowd-funded on Indiegogo and has surpassed its 1000 GBP goal, although that doesn’t matter since the campaign is a flexible campaign. The board is available for purchase from 8 GBP for a single unit excluding shipping. More information about the product can be found on the campaign page.