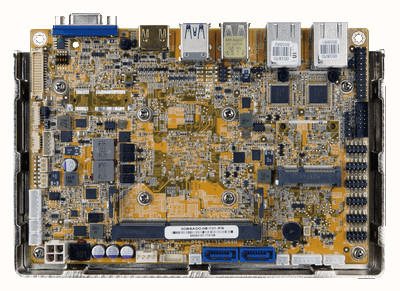 IEI is rejuvenating the G-Series with a 165 x 115mm EPIC form factor SBC named the Nano-GLX, which runs on the dual-core G-Series LX and has TDP ratings as low as 4.5W. This is the latest, and the most power efficient of the G-Series family. This is the pioneer G-Series based EPIC board. OS support is not listed, but possibly Linux and Windows can both run fine on it. The board is aimed at power efficient embedded applications (parking systems, industrial control, automation, and gaming systems).

The Nano-GLX supports the 1.8GHz G-Series GX-218GL and 1.5GHz GX-215GL, both with 15W TDPs, as well as the 1GHz GX-210KL with a 4.5W. Also supports up to 8GB DDR3/DDR3L RAM and offers dual, powered SATA III slots. Even though IEI mentions “dual PCIe Mini” in the ordering guide, the spec list shows that there is only a single mini-PCIe slot that supports both PCIe and mSATA.

The SBC is fitted with 2x GbE, 2x USB 3.0, and 2x USB 2.0 ports. Other posts included are VGA and 4K-ready HDMI port, which together enables dual autonomous displays. Also available is LVDS along with analog and S/PDIF audio interfaces. Onboard Input and output (I/O) includes 6x serial, 8-bit DIO, TPM, and more.