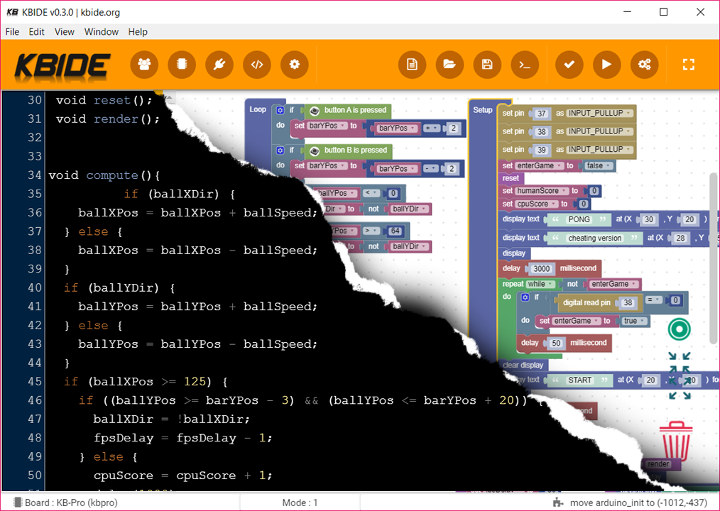 KB-IDE Supports Arduino, ESP32 and others in Dual Style Coding

Maker Asia is an organization in South East Asia which owns Maker Lab; a place where makers put their creativity in use. They have recently released a new software product and Maker Asia, who have mostly focused on a hardware product line is eventually into a new space. The newly launched product is an open source IDE; Integrated Development Environment which is suitable for all levels of learning, whether you have just started coding, or the legendary maker, KB-IDE is designed to get you covered.

The core of KB-IDE is its dual programming feature which makes it suitable for Beginners and Professionals at the same time. The IDE supports visual programming and can be used as replacement for the Arduino IDE (supports Arduino programming), and even the official Espressif ESP-IDF framework for more experienced makers. KB-IDE is a hackable IDE and sources or modules can be found in the Github repo.

An amazing feature is the framework behind it. It was made with a progressive JavaScript; vue.js. Vue.js is versatile and has core libraries any user needs to work. Users can even separate webpages to different components and work with them individually. Other tools that work with the framework include; code mirror, Blockly, Electron, Webpack, Vuetify and even Kidbright-IDE.

KB-IDE comes with a board manager which helps users switch dev boards quickly, a plug-in system which increases the capacity of the boards and it even works with the Arduino ecosystem. Compared to the Arduino IDE, the KBE-IDE is a 30-60 percent faster when it starts compiling. This is due to its fast compile feature which hopes to solve the issue of slow compiling rate.

The board manager also shows the names of the different boards thereby making it easier for a user to identify the boards we want to work with. Other features include customizable graphs and controllable sending.

KB-IDE is open source with the code available on Github.  You can install a binary release, or build it from source for Windows, Linux, or Mac OS. More information about KB-IDE and Maker Asia is available on their homepage.