Skip to content
HomeProductsKobol Launches Pre-Order for the Helios64 NAS 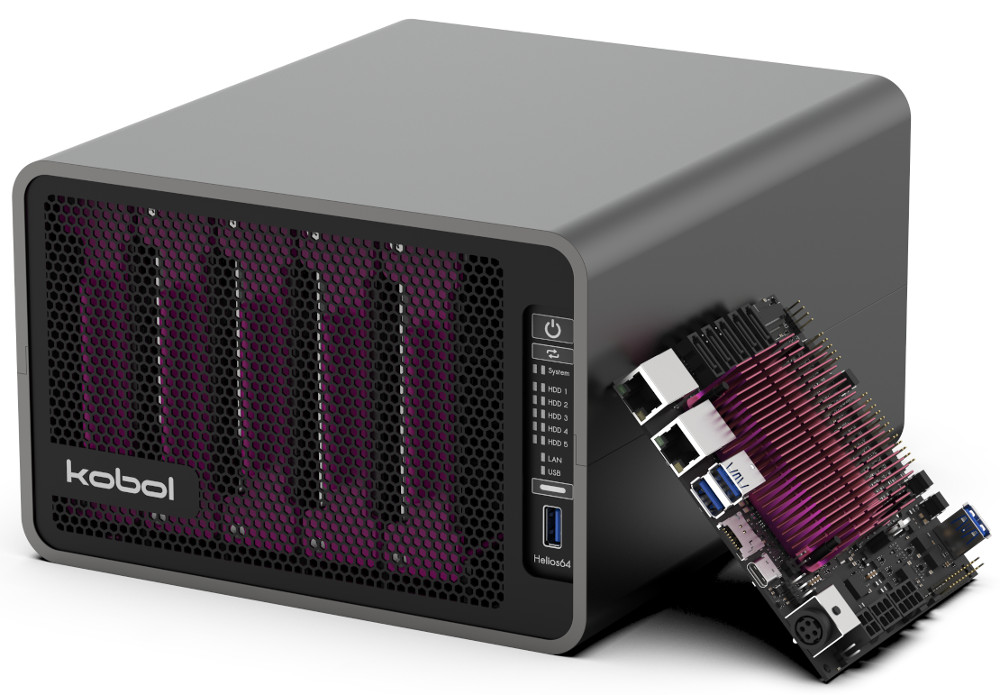 Kobol, the Singapore based manufacturer of Helios4 is set to launch pre-orders for its latest open HW/SW NAS system called the Helios64. The system which was created as an upgrade to the Helios4 NAS system will be available as a Nano-ITX SBC and a complete enclosed system, running the more powerful 64-bit Rockchip RK3399 compared to the Cortex-A9 based Marvell Armada 388 on the Helios4.

One of the major upgrades to the Helios4 is the use of the RK3399 SOC which comes with 2 x 1.8GHz Cortex-A72 cores, 4 x 1.4GHz Cortex-A53 cores, and a Mali-T860 GPU. To rain in utmost performance levels, the board ships with 4GB LPDDR4 RAM  along with a 16GB eMMC 5.1, and a MicroSD slot which could be used to further increase the storage.

Asides the upgrade in the SOC used, the new Helios64 comes with a 2.5Gbs LAN port(1 Ethernet port more than Helios4), a UPS, and an additional SATA interface to bring the total number of SATA III interfaces on it to five(5) (compared to the 4 on Helios4), with the possibility of configuring one of them for use with an SSD via an M.2 slot. In addition to the upgraded interfaces, the board also ships with:

The Nano-ITX SBC comes in a 120×120 size  that is slightly larger than the Helios4, while the full five drive systems with enclosure comes in a 250 x 222 x 134mm size with an exposed USB 3.0 port, a control panel and an internal space for dual 80mm PWM fans, and five 3.5-inch HDDs via a hot-plug tray system.

The new Helios64 will go on pre-order next week (Second week in January) with shipping and fulfillment due by March. During the Pre-order stage, the Nano-ITX SBC version will be available for $189 while the enclosure kit versions will go for $285. After the pre-order stage by March 1, the full kit will sell for $295.

Further information on the specifications of the board and Pricing is available on the product page on Kobol’s website.