Skip to content
HomeDIYMaking a Geiger counter with 555 timer IC 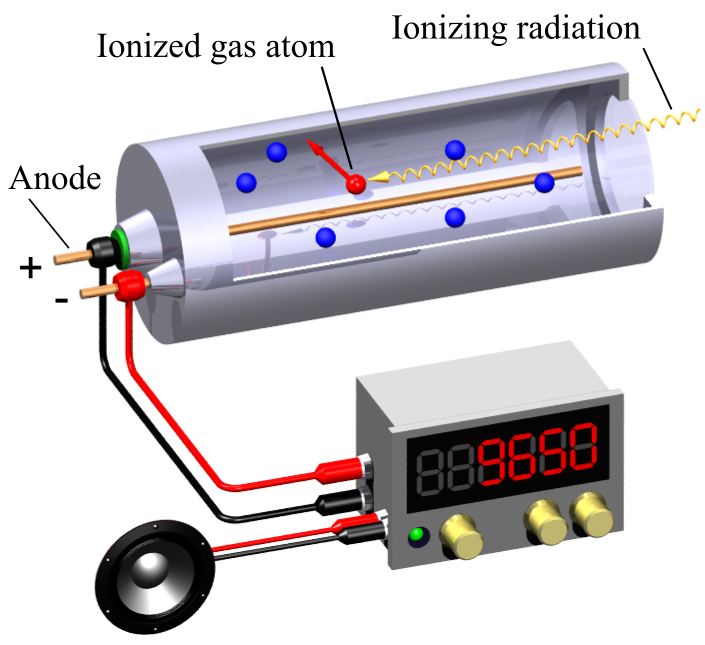 Radioactive particles are found abundantly in nature. Whether they come from space or generated on Earth (radioactive waste, medical X-rays, etc), they are high-energy particles resulting from radioactive decays. The three major types of radioactive particles are named after the first three letters of the Greek alphabet: α (alpha are helium nuclei), β (beta are high-speed electrons), and γ (gamma are high-energy photons). Exposing to any of these radiation for a long time can be dangerous as they can kill DNA and cause cancer. The presence of beta particles and gamma rays in your surrounding can be detected using a Geiger-Muller (GM) tube in conjunction with some basic electronics.

The GM tube is essentially a tube filled with an inert gas (at low pressure) and two electrodes at its opposite ends. A high voltage (~400-700V) is applied between the two electrodes but no current flows between them under normal condition. When radioactive particles passes through the tube, some of the gas molecules get ionized, which results in a short intense pulse of current between the electrodes.

The following circuit (originally published on Elektor July 2006 magazine) illustrates how a GM tube can be used with some basic electronics to make a radiation detector, often known as Geiger counter. The circuit uses two 555 timer ICs. The first 555 timer is setup as an astable multivibrator and drives a step up (6V-to-250V) transformer through a transistor to generate 250V alternating voltage. The high voltage output from the transformer is further amplified using a voltage multiplier circuit made of diodes and capacitors to derive a ~700V source required for the GM tube. When a radiation is detected, the current flow through the tube triggers the second 555 timer circuit, which is configured to produce a tick sound on a speaker when triggered. The output from the second 555 timer can be further fed to a counter circuit for counting the detected pulses.

More recently, tanner_tech published an Instructable on building a similar Geiger counter using a single 555 timer and a piezo buzzer. His GM tube operates at a much lower voltage (~400V).