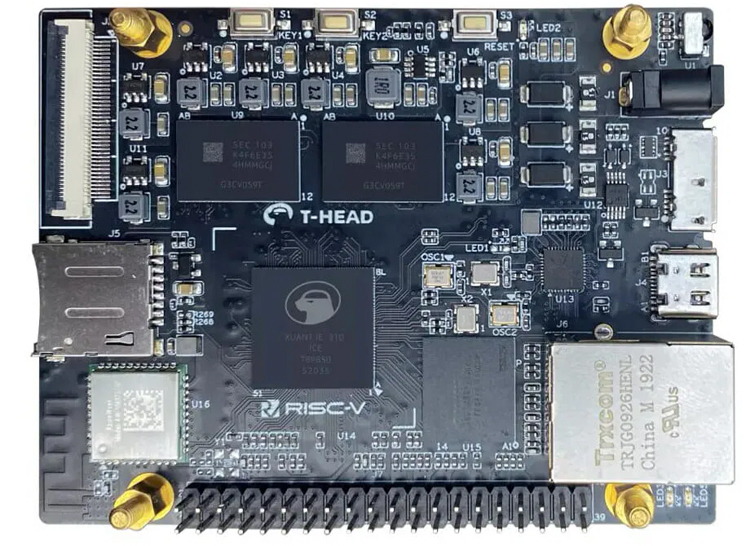 Single-board computers (SBC) have seen widespread application in the hardware ecosystem owing to the growing demand for mobile, portable, and embedded systems with reduced system’s overall cost and connectors problems. Amongst the variety of SBC architectures available in the market, the RISC architecture has become makers’ favorite for its low number of cycles per instruction (CPI), through its load/store design to support very high-speed devices. However, a large number of RISC SBCs still lack the ability to offer 3D GPU acceleration that is in demand.

Sipeed’s new launch is targeted to solve this problem. The board aptly called Alibaba T-Head RVB-ICE, proves to be the first RISC-V SBC that is 3D GPU capable.

Alibaba T-Head RVB-ICE is designed on the architecture of Alibaba T-Head ICE dual-core XuanTie C910, 1.2 GHz RISC-V processor furnished with Vivante GC8000UL GPU and an AI accelerator NPU. Its SoC incorporates an additional 1.2 GHz C910V core with 128-bit capable vector extension, a DDR4 with speed up to 2400 Mbps, a GMAC interface, and a single-core 3D GPU for 3D graphics acceleration. The board supports Debian 11 and Android 10, with support for a capacitive touchscreen display.

Key Features and Specifications Include: The Alibaba T-Head RVB-ICE is available for pre-order on RVB-ICE and Aliexpress for $399 alongside its 7-inch display. Patches and scripts for AOSP for the XuanTie RISC-V chip are available on T-head/RISCV-aosp’s Github repository for a guide on successful development with the board. The cost is probably on the high side because it’s only available in low quantities. Hopefully, with time, more lower-cost RISC-V boards with GPU should be released. Shipping for the Alibaba T-Head RVB-ICE board is scheduled to start next month.

Further details can be found on RVB-ICE and Github.