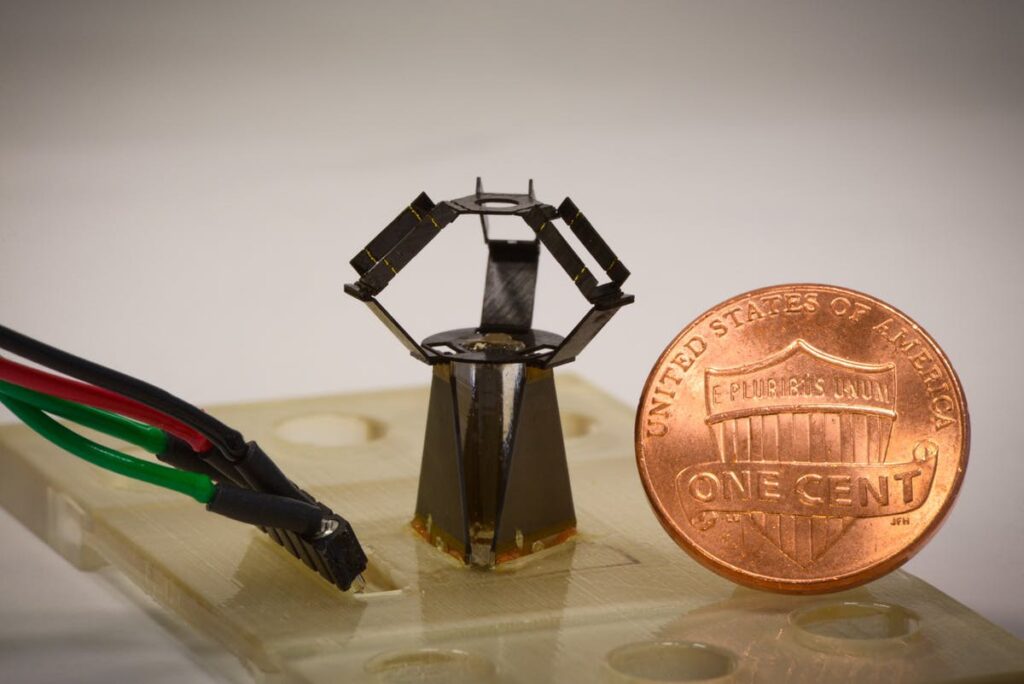 milliDelta Robot- High speed and Precision in a Compact Design

Delta robots are machines with three arms designed to move at high speeds and perform precise tasks. The three arms are connected to a universal join at the base, and the device uses parallelograms that restrict the movement avoiding rotation. As a result, they can move in x, y, and z plane and have high acceleration because it’s made of a light material. They gained popularity in factories for assembly and packaging, so modern devices have been designed to move in more degrees of freedom at accelerations as high as 100 g picking up to 300 items per minute.

The milliDelta robot designed by Harvard’s Wyss Institute measures 15 mm x 15 mm x 20 mm which makes it lighter. As it weights less, the force needed to move it is smaller causing a huge increase in speed. The device uses piezoelectric actuators that allow the milliDelta to move at up to 75 Hz, and the precision is down to 5 micrometers. The developing team proved that milliDelta can operate in a workspace of about 7 cubic millimeters and has a payload capacity of 3 times its mass which helps optimize spaces in factories where thousands of these devices are used to perform tasks in sequence.

The robot was designed for micro- assembly and microsurgery. Many times, in medical situations speed is a key factor for saving someone´s life, and the milliDelta can achieve speeds that humans cannot. The device is clearly not a replacement for medical professionals, it is a tool to perform faster and more precise procedures. Additionally, the precision could allow for less invasive operations. For electronics manufacturing, the milliDelta is a game changer in time spent a production, and in mistakes made in assembly. This delta robots could be used for 3d printing which for some applications requires micrometer precision, and could reduce printing times significantly.

The device has proven to be 15 to 20 times faster than commercial delta robots, and even though it cannot do any heavy lifting it could revolutionize the industries mentioned before. Delta robots are expanding to new industries which means that we may soon see them performing completely different tasks at different situations while maintaining their characteristics properties such as smooth, precise, and fast movement. Harvard’s delta robot is not currently for sale.