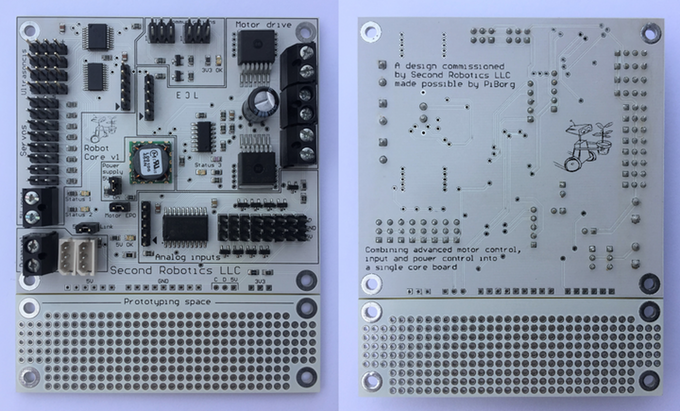 The Robot Core, which is a robot control board for the Raspberry Pi and Arduino, brings many different elements into one awesome package. It allows you to efficiently control motors, servos, and read sensor data without needing 3-4 additional boards to hookup. Several Robot Core boards can be connected together in a linear series to add even more functionality.

Robot Core uses I²C (Inter-Integrated Circuit) to communicate with Raspberry Pi. I²C is a widely used serial computer bus invented by Philips Semiconductor. It is a very easy-to-use two-wire bus that your Pi has no difficulty talking with. A built-in level shifter ensures compatibility to both 3.3 volt and 5 volts I²C buses. The Robot Core supports all Raspberry Pi boards (the past and present versions) and some Arduino boards also.

The board has software provided in the form of libraries and python example programs to get you started fast. Thanks to Second Robotics for making the software Open Source. All required resources will be available in July 2017. Currently, available links are – Drivers and Libraries, Support Documents.

This board provides up to two 5 Amp continuous load DC motor outputs that can be used as a pair to drive a single stepper motor. The Robot Core’s built in safety protection prevents overheating and detects the motor failure.

The Robot Core can set servos to exact position with the help of 16 bit PWM signal. It has eight ports for both analog and digital conventional servos. You can tune each servo using software-based GUI tuning method and also set their start-up positions individually.

You can connect up to 4 ultrasonic sensors (HC-SR04) with the board. Given libraries convert measured distance into millimeter. The Robot Core board can provide filtered outputs with higher accuracy or raw outputs with greater speed, the choice is yours.

Up to 8 12-bit analog inputs are supported for sensors or feedback. Each input has a range of 0-5V and the board also provides protection from exceeding the input limits. The additional analog reading for main power voltage lets you monitor supply voltage in real-time. The Robot Core has configurable warnings for low power.

The range of input voltage is 6.4v to 14v. An onboard DC-DC regulator is there for generating 5 volts, capable of providing 6 Amps current to the load. Optional separate power supply inputs for servos and for Dynamixel servos are also present.

Application Of The Robotcore Board:

The Robot Core is an all-in-one solution for many projects. One can do pretty much any autonomous and/or robotics projects with this board. The possibilities are endless. Below are just some example projects: