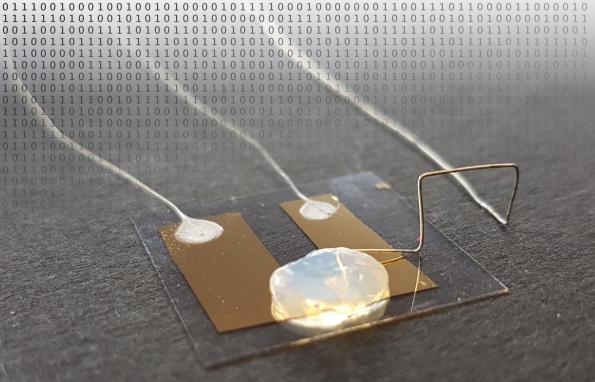 Karlsruhe Institute of Technology (KIT) researchers in Germany have developed a single-atom transistor that can reduce the power consumption of electronic systems significantly. The device is being developed by Professor Thomas Schimmel and his team at the Institute of Applied Physics (APH). The single-atom transistor switches electrical current by controlled repositioning of a single atom in a gel electrolyte. The device works at room temperature and consumes a very small amount of energy. It also has the potential of opening up an entirely new perspective for information technology.

Prof Schimmel, who conducts research at the APH, the Institute of Nanotechnology (INT), and the Material Research Center for Energy Systems (MZE) of KIT said,

This quantum electronics element enables switching energies smaller than those of conventional silicon technologies by a factor of 10,000,

Earlier this year, Professor Schimmel, who is recognized as the pioneer of single-atom electronics, was appointed Co-Director of the Center for Single-Atom Electronics and Photonics established jointly by KIT and ETH Zurich.

The experts produced two-minute metallic contacts with a gap as wide as a single metal atom. The gap was tested with a source-drain current ranging from 1 to 8 µA. With the help of an electrically controlled pulse, they positioned a single silver atom into this gap and closed the circuit. Just when the silver atom is removed from the gap, the circuit is interrupted and the flow of current is stopped. Thus it acts just like a switch and can be used for high-speed electronic switching circuits.

The world’s smallest transistor switches current through the controlled reversible movement of a single atom. It’s also a contrary to conventional quantum electronics components. The single-atom transistor has a broad range of working temperature from near absolute zero to the room temperature. This can be a breakthrough for future electronics.

The single-atom transistor is made of metal only without any semiconductors. This results in extremely low electric voltages and, hence, an extremely low energy consumption. Previous devices of this category developed at KIT have used a liquid electrolyte, but this latest version uses a solid electrolyte.

The gel electrolyte was produced by gelling an aqueous silver electrolyte with pyrogenic silicon dioxide combines the advantages of a solid with the electrochemical properties of a liquid. In this way, both safety and handling of the single-atom transistor are improved.