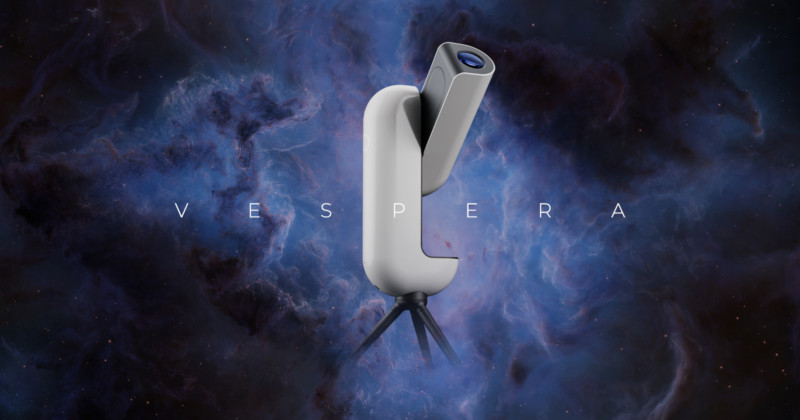 It has always been a far fetched idea for the hobbyists to get hold of a good telescope and go observing the night sky and take various breathtaking pictures. There has been a very steep learning curve with the technicalities of space exploration. Also, the essential pieces of equipment are cumbersome and expensive. That’s why many give up on their hobby of exploring the night sky. A small company called Vaonis from New York is showing big promises for space observation hobbyists and enthusiasts with their Kickstarter campaign for Vespera.

Vespera is the combination of a telescope and a camera. It is smart and fully automated with the help of a mobile device combined with their app. With the help of this new smart device, the user can explore and observe the night sky along with capturing photos of celestial objects. It has a tripod with adjustable legs. It calibrates itself through the GPS and its so-called “Star Field Recognition technology“. The setup process is easy as that of selecting a celestial object in the app and clicking a button to start the automated tracking and observation.

The telescope used here is a custom made an optical design based on 4 lenses in 2 groups with a focal length of 200mm and 50mm aperture. They claim to have zero distortion, zero chromatic aberration and, zero astigmatisms. For the camera they are using, the 2MP Sony sensor IMX462 Starvis, enhanced with their custom-made electronic card. The brain of the system is a Raspberry Pi (undisclosed model) running their patented image processing algorithm to get the best out of the Sony sensor. As mentioned by the company, it has water resistance and an integrated battery with 4hours of backup.

The Vespera has already surpassed the original Kickstarter goal by a significant amount. According to Vaonis the device should be arriving at the backers by Christmas of 2021. For a complete list of all available early bird pledges, stretch goals, and other information check their Kickstarter page.