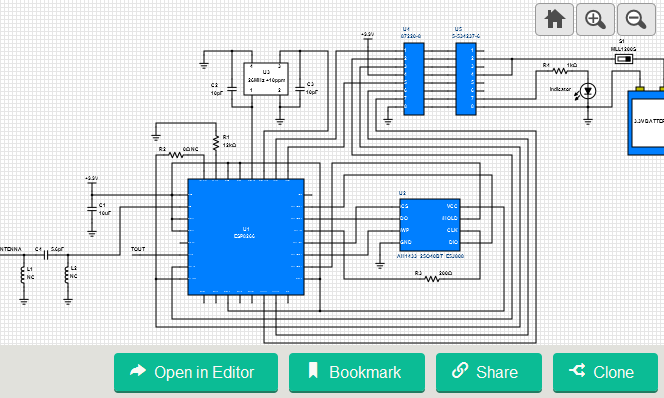 A WiFi (Wireless Fidelity) is a technology that uses the 2.4GHz UHF and 5GHz SHF ISM radio bands to allow devices such as computers, smartphones, digital cameras, tablet computers, etc. to network. Nowadays the WiFi technology is being used by cities to provide free or low-cost Internet access to residents. The WiFi is inexpensive and is easy to setup but it is also unobtrusive. The people may not know that they are in a hotspot unless they open their smartphones or tablets and stream movies on it.

This reference design is a simple circuit that helps WiFi users determine if there is a hotspot nearby. The circuit uses a WiFi chip, a crystal, an SPI flash and some other external components to detect if there is a WiFi network available within the area. The WiFi chip is programmed to spot wireless networks and display the result on a small light emitting diode (LED) connected to one of the GPIO pins of the WiFi chip. The LED will just keep on blinking if there is no wireless network available within the area. As soon as the WiFi chip detects a network, the LED will stop blinking and become steady.

The prototype of this circuit must be in small size so that it is wearable. The WiFi chip and the LED with the battery can be soldered into two different PCBs to make the prototype smaller. The TE Connectivity 87220-8 male and 5-534237-6 female header then connects the WiFi and the LED PCBs. The WiFi chip only consumes small power especially when it is in standby mode. But to conserve power when it is not used, the user can turn OFF the WiFi detector using the TE Connectivity MLL1200S slide switch.