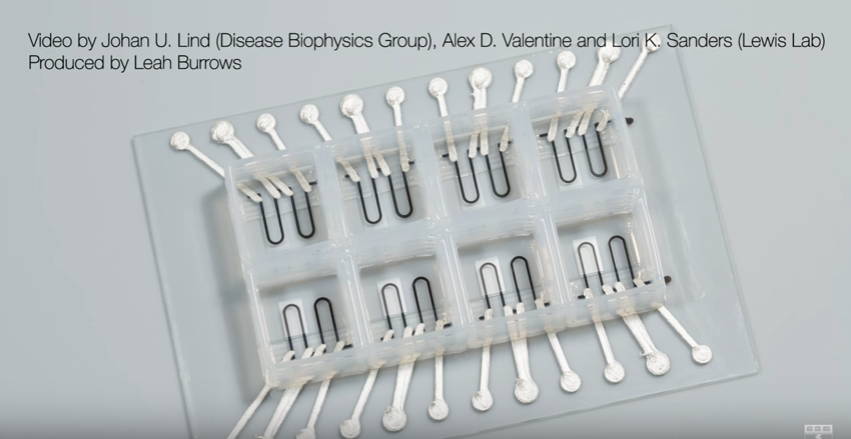 Researcher at Harvard University had been working to build new microphysiological systems (MPS), also known as organs-on-chips, that can mimic the operation of the structure and function of native tissue.

By developing such systems, they are replacing the conventional way of measuring and testing synthetic organs -usually by testing them first on animals.

Although such a solution can help in advancing research and making easy organ-replacement real, but it also somehow costly and considered as laborious.

To build up this system you need a clean room and you have to use a complex, multistep lithographic process. To collect data you also need microscopy or high-speed cameras. Considering also the fact that current MPS typically lack integrated sensors, researchers developed six different inks that integrated soft strain sensors within the micro-architecture of the tissue.

They combined all the steps in one automated procedure using 3D printer. The result was  a cardiac microphysiological device — a heart on a chip — with integrated sensors.  According to the research paper, these 6 inks were designed based on “piezo-resistive, high-conductance, and biocompatible soft materials that enable integration of soft strain gauge sensors within micro-architectures that guide the self-assembly of physio-mimetic laminar cardiac tissues”

“We are pushing the boundaries of three-dimensional printing by developing and integrating multiple functional materials within printed devices,” said Jennifer Lewis, Hansjorg Wyss Professor of Biologically Inspired Engineering. “This study is a powerful demonstration of how our platform can be used to create fully functional, instrumented chips for drug screening and disease modeling.”

You can check this video to see this heart in action, and to take a look at the 6 inks 3D printer

Right now, researchers are testing their new heart-on-chip by performing drug studies and longer-term studies of gradual changes in the contractile stress of engineered cardiac tissues, which can take multiple weeks. This approach will make it much easier to test and measure the tissue contractile and its response to various chemicals like drugs and toxins.

This work was published in Nature Materials and the research was named “Instrumented cardiac microphysiological devices via multimaterial three-dimensional printing”.It was supported by the National Science Foundation, the National Center for Advancing Translational Sciences of the National Institutes of Health, the US Army Research Laboratory and the US Army Research, and the Harvard University Materials Research Science and Engineering Center (MRSEC).  For more information, you can check the paper out here and learn more at Harvard website.