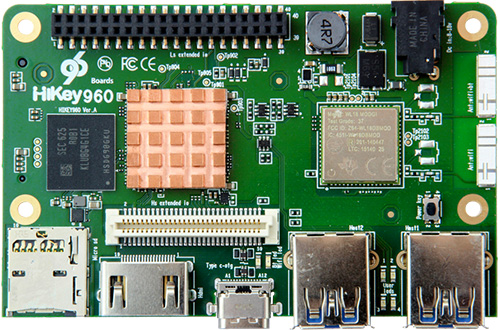 A development platform for the Android open source project (AOSP) has been created by Huawei. The ARM-based hardware is part of the Linaro open source collaborative engineering organization developing software for the ARM ecosystem.

Recently, Huawei has launched the HiKey 960 96Boards development platform to provide access to the latest ARM mobile technology for AOSP developers. Fortunately, You can find this new board  listed on the 96Boards website and is available through global distribution channels.

In fact, initial software support for the board is provided in the AOSP source tree based on the Android Common Kernel using the Linux 4.4 kernel release. Meanwhile, Linaro and Huawei are also working on the Linux 4.9 based Android Common kernel and maintaining support for the Kirin 960 SoC in the mainline kernel.org tree, allowing for the availability of multiple Linux distributions for this board in the future.

In addition, Huawei has released the source code with Linux and other open source libraries and programs for their Huawei Mate 9 / Mate 9 Pro and Huawei P10 / P10 Plus models powered by Hisilicon Kirin 960 processor. You can the source from Huawei open source page.

At this point, Hikey 960 is available for $239 on Amazon (USA), Seeed, Lenovator and many other stores.

“The HiKey 960 delivers on the goal of 96Boards to provide access to the latest ARM technology to the developer community, with support for the latest Huawei mobile SoC featuring high performance ARM Cortex-A73 cores coupled with the latest generation of ARM Mali GPU technology.” – George Grey, CEO of Linaro

Moreover, you can find information about the HiKey 960 board here and about running Android from here: http://source.android.com/source/devices.html. Also, Linaro is providing instructions for developers here: http://linaro.co/hikey960-start.