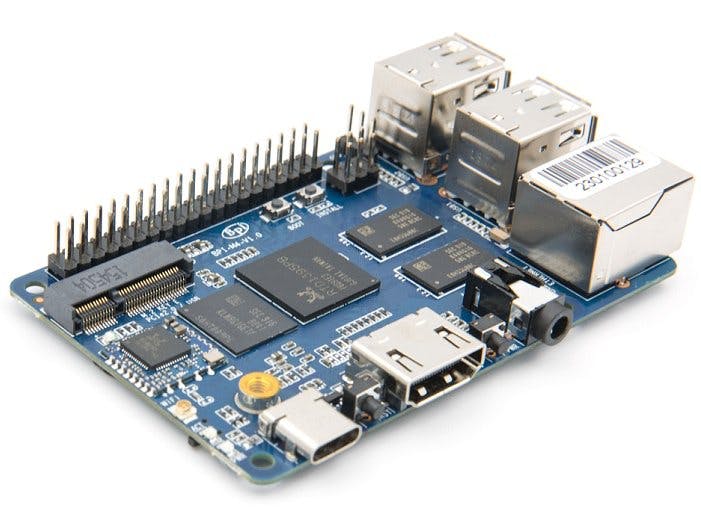 This year SinoVoip revealed Banana Pi BPI-M4 – a mid-range  SBC that runs Android 8.1 or Linux on a quad -A53 Realtek RTD1395 SoC featuring HDMI, M.2, WiFi/BT, 40-pin GPIO, PoE support, and 5x USB ports. SinoVoip is well-known for its Allwinner SoC based single board computers and the Banana Pi line of product. But this BPI-M4 SBC sports a quad-core, Cortex-A53 based Realtek RTD1395. Their earlier BPI-W2 router board was also powered by a Realtek quadcore SoC.

The Banana Pi BPI-M4 is said to have a Raspberry Pi layout, despite being a bit larger in both dimensions with a footprint of 92 x 60mm. Unlike the RPi SBCs, there’s an option for 2GB in addition to 1GB RAM, and it’s DDR4. You also get 8GB to 64GB eMMC and a microSD slot. The clock rate of RTD1395 SoC is not listed but the Cortex-A53 foundation and Mali 470 MP4 GPU would make it more powerful than the BPI-M2 series of boards like BPI-M2 Berry, BPI-M2 Magic, and BPI-M2 Zero. The 1.8GHz  octa-core BPI-M3, with PowerVR SGX544MP1 GPU, might outperform it though this is not confirmed yet.

The Ethernet speed of BPI-M4 is 10/100Mbps, and there’s a Power-over-Ethernet (PoE) connector that supports the official Raspberry Pi PoE HAT. The YouTube video below shows the SBC booting Android 8.1.1 via PoE power. SinoVoip also states it will run full Linux with a new Realtek SoC, which may take a while. The Banana Pi BPI-M4’s HDMI port is limited to 1080p. This SBC also lacks the support for H.265. There are 4x USB host ports on BPI-M4. You also get a USB Type-C port that offers another power alternative. The board ships with WiFi-ac and BT 4.2. A cellular modem can also be attached using the M.2 E-Key slot. This 5V board has power and boot buttons.

The key specifications are:

Pricing for the Banana Pi BPI-M4 is not yet available on the official product page.

The Banana Pi BPI-M4 is available on AliExpress for $38 (plus $5.26 to the U.S.) with 1GB RAM and 8GB eMMC. More information may be found on the BPI-M4 AliExpress page and the wiki.