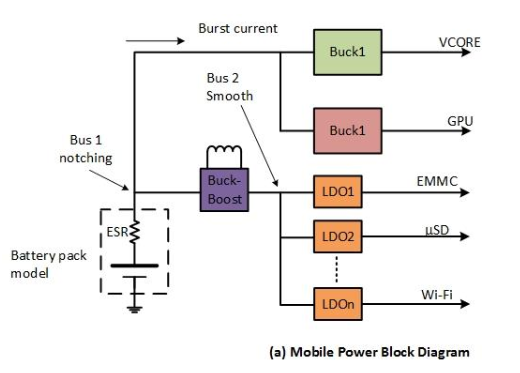 Systems powered from a battery may have voltage brownout when they are subjected to a burst current discharge, that is because of internal resistance of the battery. The internal resistance in Li-Ion battery varies according to its charging level. It can reach 200 Milli-ohm at the end of the discharge. Thus, a 4A burst current can cause an 800mV droop at the terminal, pushing the nominal 3.4V voltage to 2.6V, which is considered as a brownout voltage if the target LDO output is 2.85V. In this case boost converters prevent the momentary brownout.

Overall system efficiency is another useful aspect of using a buck-boost converter as a pre-regulator. The battery voltage is first converted to a voltage slightly higher than the highest LDO output voltage of the target LDOs, which is typically 3.3V. The buck-boost output is then set to 3.4V. So, the LDOs see a 3.4V input voltage, regardless of the battery voltage.

We can see, by numbers, the improvement of efficiency by comparing the two setups, with and without using the buck-boost converter. 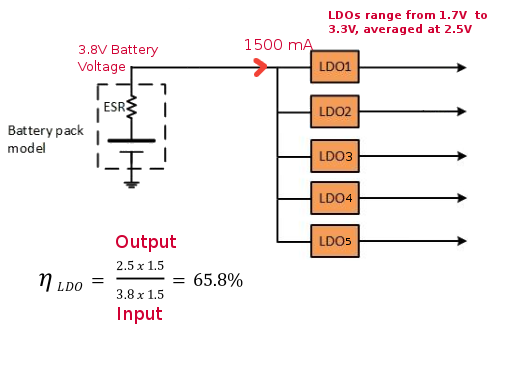 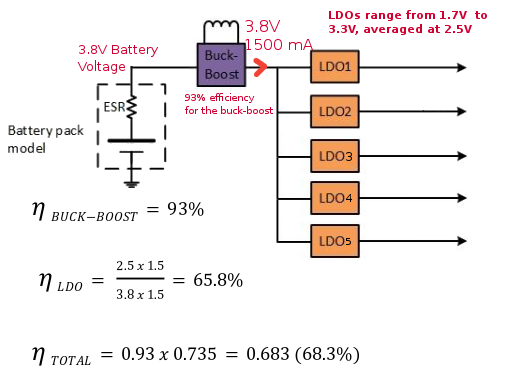 The figure below shows the comparison of battery discharge with and without a pre-regulator, while running the same applications with the same battery. You can see 12% enhancement to battery life. 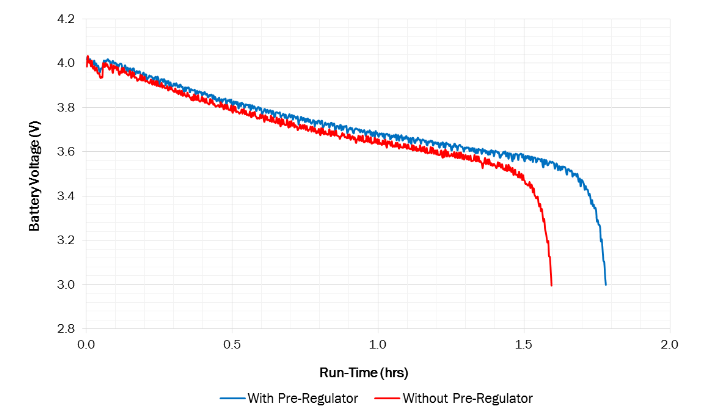 I am not sure that placing multiple regulators in series is a good idea for overall efficiency.

In the example shown there are multiple required output voltages which is very common and it represents a design challenge.

I have worked in this area for a while and a multi tap flyback inductor might be considered. It provides multiple output voltages from a single coil with a single power switch. You can get over 90% efficiency depending on the out voltage. At lower output voltages diode drops become significant and a synchronous rectifier can do wonders.

Multiple flyback outputs are not perfectly regulated but you can typically get them to about 5%. Tight coupling using multifilar wire helps as does copper foil. Adjusting a turn on the transformer and/or selection of PN vs schottky diode can get things really close. Using an LDO after a flyback will also get you excellent regulation with pretty good efficiency.

There are some sample flyback schematic on my site.