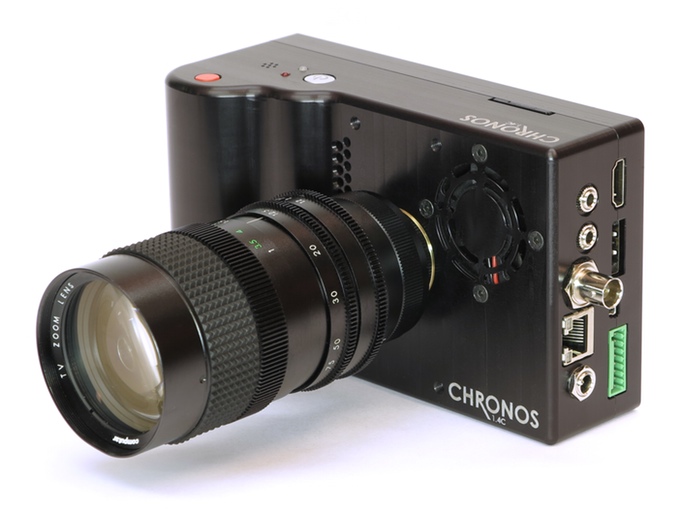 The Canadian Kron Technologies, led by its founder David Kronstein, has just launched a brand-new camera: Chronos.
Chronos 1.4 is a purpose-designed, professional high-speed camera. It enables you to capture stunning high-speed video at up to 1280×1024 resolution thanks to its 1.4 gigapixel-per-second throughput. Its frame rate ranges from 1,057fps at full resolution, up to 21,600fps at minimum resolution.

David is an electronics engineer specializing in digital systems, FPGAs, and image processing. His passion for high-speed imaging began in 2006 since he was unable to afford a high-speed camera at the time. Starting from the belief that high-speed imaging should be for everyone, David wanted to disrupt the high-speed video industry with Chronos. Chronos is about 1/10th the price of similar professional camera ($25000), plus it has more features and  better usability. Renting a traditional camera that has similar features for 2 weeks may cost you more than getting Chronos!

David started a campaign on Kickstarter for his amazing camera, check the campaign video

Detailed specification can be found at the datasheet.

Good news that Chronos full source code and development environment for the camera’s user application will be released soon. Everyone now can modify the operation of the camera, add features, and contribute to improve the software!

Check the campaign page for detailed description and more updates, The campaign still has 22 days to go and it already has achieved 5 times its goal in record time! You can pre-order your Chronos now for $2700 and also get the best accessories you need.