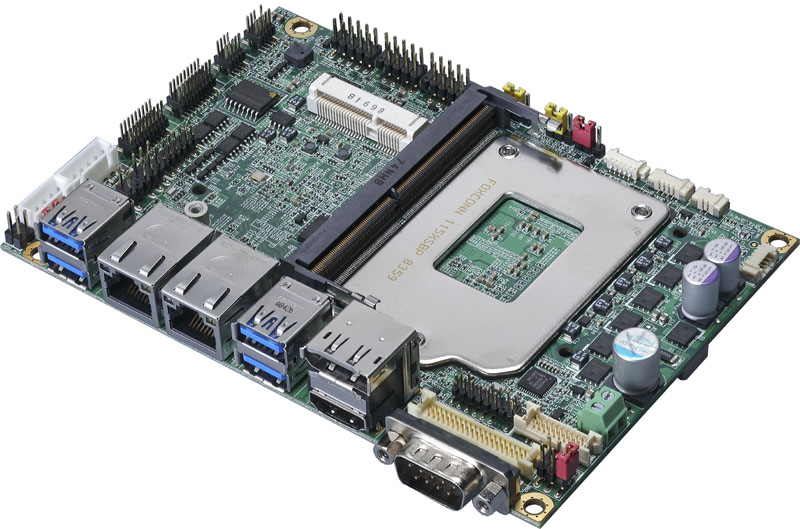 Commell the worldwide leader of Industrial Single Board Computers, has launched its Intel’s 8th Gen Coffee Lake based 3.5-inch LS-37L board. This comes after they launched the LV-67X back in August. Just like the LV-67X, the LS-37L board has the same FCLGA1151 socket, that supports up to 6-core, 65W TDP Coffee Lake S-series processors like the 3.1GHz/4.3GHz Core i5-8600. It supports Windows drivers according to the product page, but the user manual says it also supports Linux. The LS-37L has a 0 to 60°C range and enables up to 16GB DDR4 (2666MHz).

It has a similar features with the Avalue’s ECM-CFS, but the main difference is the LS-37L’s wide-range 9-25V supply in place of a standard 12V input. The LS-37L is outfitted with more USB and serial headers and includes a PS/2 interface, an RTC with battery, an LCD inverter, and a SIM slot. The LS-37L lacks the Avalue board’s ACPI power management and optional TPM. The LS-37L board offers triple display support, but rather than the dual HDMI ports plus LVDS you are provided with an option of two configurations.

The standard LS-37L model offers an HDMI port, a DisplayPort, and internal DVI, VGA, and LVDS interfaces. The LS-37LT SKU substitutes the DisplayPort with a second VGA or LVDS header. The LS-37L is fitted with 2x GbE, 2x SATA III, 4x USB 3.1, and a RS-232 COM port. Internal I/O features includes 3x RS232/422/485, 2x RS-232, and GPIO. The board provides a mini-PCIe slot with mSATA support. The slot also acts as a support for other mini-PCIe cards, and there’s a SIM slot for wireless. No pricing or availability information is provided for the LS-37L SBC. We hope to get that information soon.

Specifications listed for the LS-37L include:

More information may be found in Commell’s LS-37L announcement and product page.