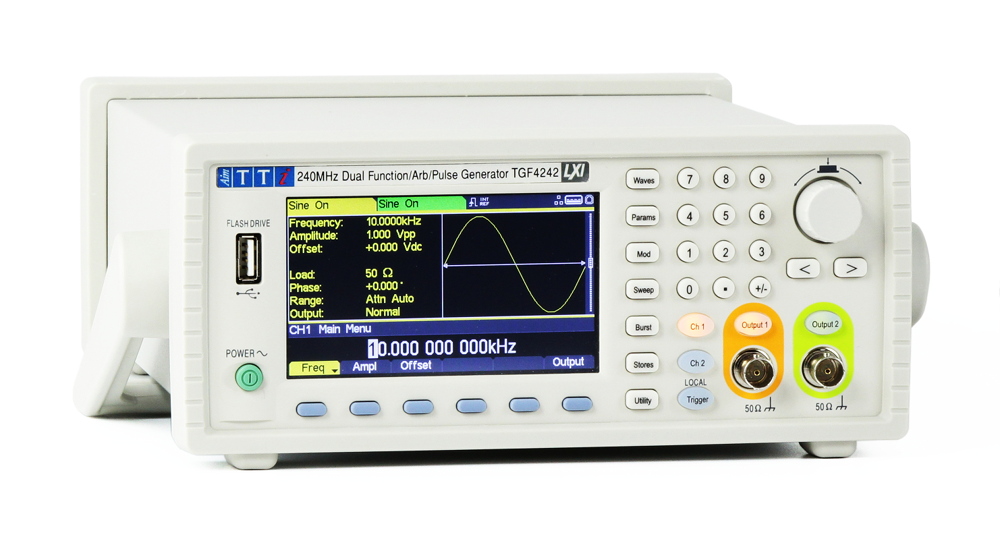 Sine frequency up to 240MHz with 1μHz resolution Up to 100MHz high resolution pulse generator Arbitrary waveforms up to 16bits at 800MSa/s Wideband noise generator.

The TGF4000 Series out-performs other generators in its price range by offering models at up to 240MHz with low harmonic distortion and phase noise. Audio band THD is significantly better than similar generators at just 0.05%.  The pulse generator function offers an exceptional pulse width resolution of 100ps over a period range from 10ns to 1000s. The pulse edge speed is independently variable from 3ns to 800s. Pulse jitter is dramatically lower than any comparable generator at only 30ps. The two channels can be operated completely independently as if they were two separate generators. Coupled operation is available for frequency, amplitude and output on/off enabling simultaneous output changes on both channels. Relative phase can be set from -360 degrees to +360 degrees with 0.001 degree resolution.

The main outputs can provide up to 10V pk-pk into 50Ω (20V pk-pk EMF) for frequencies up to 80MHz. High levels of DC offset can be set in conjunction with low signal levels, and the attenuator can be fixed to prevent glitches when changing levels. Amplitudes can be entered as peak to peak voltage plus offset or in terms of high level and low level. The amplitudes are shown relative to a 50Ω load impedance or as the open circuit EMF values. Alternatively, the user can enter any load value between 1Ω to 10kΩ and the amplitude will be calculated accordingly. A wide variety of waveforms can be generated between 1µHz and 240MHz with high resolution and accuracy. Sine waves are produced with low distortion up to 240MHz. Square waves with fast rise and fall times can be generated at up to 100MHz. Linear ramp waves are produced to 5MHz. Ramp and square waves also have variable symmetry. The TGF4000 can generate high resolution, low jitter, variable edge time pulses to 100MHz with variable period, pulse width and amplitude.

Internal AM, FM, PM, ASK, FSK, BPSK, SUM* and PWM modulation make it easy to modulate waveforms without the need for a separate modulation source. Linear and logarithmic sweeps are also built in, with sweep rates selectable from 1µs to 500s. Burst mode operation allows for a user selected number of cycles at each trigger event. The Noise function provides wideband gaussian noise at bandwidths up to 100MHz and crest factor of more than five. Noise can be used both as a carrier waveform and as a modulating waveform for AM, FM, PM, PWM and SUM modulation types. As a carrier it can be AM, ASK or SUM modulated. Additional features of the 16 bit TGF4242 and TGF4162 include the harmonics generator function whereby waveforms can be created by the addition of up to 16 sine wave, chosen from up to the 50th order. The amplitude and phase can be individually set for each harmonic. PRBS (Pseudo-Random Bit Sequence) is a binary waveform type that is widely used within secure communications systems. PRBS is offered with a choice of 8 sequence lengths at rates between 1mbps and 50Mbps. PRBS can be used as both a carrier waveform and a modulator.

The TGF4000 series is equipped with a 4.3 inch high resolution colour screen, providing added efficiency and clarity when carrying out complex testing. Graphs for both channels can be displayed side by side for easy comparison or alongside a detailed description of the settings selected. Each channel has a set color to provide instant recognition of the output channel selected when altering and updating settings or preferences.

LAN and USB interfaces are standard and there is full compliance to LXI Core 2016.  GPIB is optional.