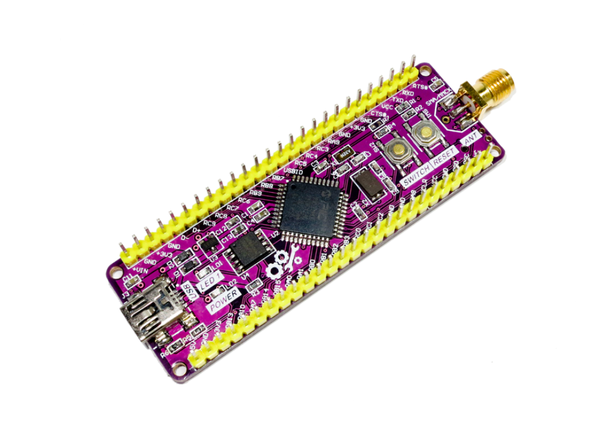 The tinyWireless PIC32 model is built around a powerful PIC32MX250F128D core 32-bit MIPS32 M4K microcontroller. It can operate at a frequency of up to 50MHz, offering a total of 83 Million Instructions Per Second (MIPS). The hardware also features 32kB of RAM and 128kB of flash program memory. There are 35 user-configurable IO pins on the board, as well as two UARTs, two SPI buses, two I2C buses, and five 16-bit timers. In addition, the PIC32’s RTCC hardware and the installed 32.768kHz watch crystal provide full support for Real-Time Clock (RTCC) functionality.

This flexible development platform supports the long-range ISM band RFM69HW wireless transceiver. It has wireless transmission speeds of up to 300kbps with AES-128 bit encryption to prevent wireless sniffing. Depending on the data rate and RF environment, these modules can communicate over many kilometers. What makes it even more remarkable is that the RFM69HW is programmable in both narrow-band and wide-band communication modes without the requirement for external components to be modified.

The RFM69HW module is also a perfect alternative for battery-powered applications due to its wide operating voltage range of 1.8–3.6 V and low current consumption. Plus, the module gives a +20dBm output power and can be purchased in 433MHz, 868MHz, or 915MHz frequency variations. Furthermore, tinyWireless has a 32Mbit SPI FLASH and USB or UART ports for communication with your PC, making it ideal for data logging applications.

Talking about the software support, the board can be programmed natively in C/C++ for ultimate power and control. It can be compiled using Microchips Free XC32 C/C++ compiler. Plus, tinyWireless also works with Microchip’s Harmony Integrated Software Framework, which allows the PIC32 hardware to be abstracted from the programmer, hence speeding up software development.

“In addition, tinyWireless development boards are able to run your favorite Arduino sketches, using a number of open-source tools such as chipKit MPIDE or Pinguino. TinyWireless has a Fubarino Mini compatible footprint to simplify Arduino use with the chipKit MPIDE,”

The tinyWireless PIC32 development board is available on Tindie at $30. For more information visit the product page. Images and technical specifications have also been taken from the product page.