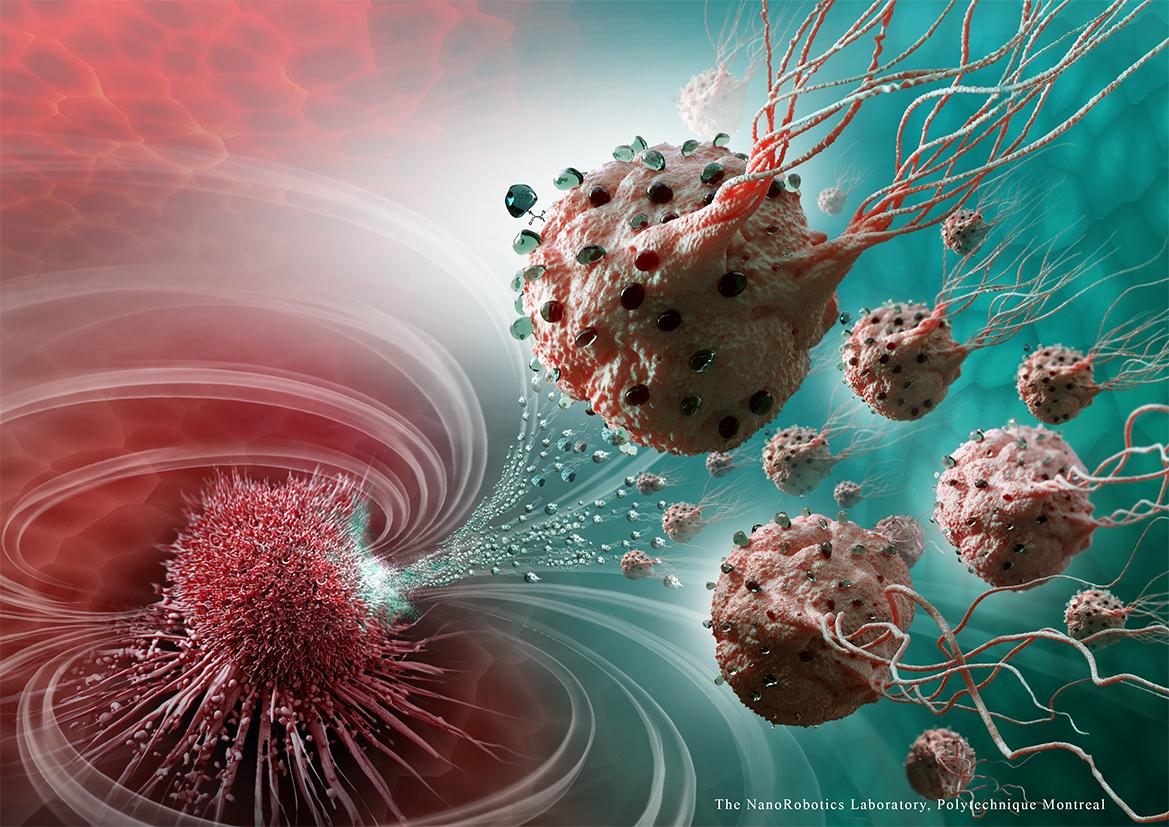 Researchers from Polytechnique Montréal, Université de Montréal and McGill University have just achieved a spectacular breakthrough in cancer research. They have developed new nanorobotic agents capable of navigating through the bloodstream to administer a drug with precision.

Professor Sylvain Martel is holder of the Canada Research Chair in Medical Nanorobotics and the Director of the nanorobotics laboratory at Polytechnique Montreal, where he studies medical applications of nanotechnology. Martel and his team have demonstrated major progress with a new technology that could revolutionize cancer treatment by using guided micro-transporters to deliver drugs. Thus cancerous cells can be locally targeted and then stop their growth.

This breakthrough in cancer-fighting research would ditch chemotherapy for nanorobots that fight cancer inside the human body. This research was published in the prestigious journal Nature Nanotechnology in an article titled “Magneto-aerotactic bacteria deliver drug-containing nanoliposomes to tumour hypoxic regions.” The article notes the results of the research done on mice, which were successfully administered nanorobotic agents into colorectal tumours.

“These legions of nanorobotic agents were actually composed of more than 100 million flagellated bacteria — and therefore self-propelled — and loaded with drugs that moved by taking the most direct path between the drug’s injection point and the area of the body to cure,” explains Professor Martel “The drug’s propelling force was enough to travel efficiently and enter deep inside the tumours.”

When they enter a tumour, the nanorobotic agents can detect in a wholly autonomous fashion the oxygen-depleted tumour areas, known as hypoxic zones, and deliver the drug to them. This hypoxic zone is created by the substantial consumption of oxygen by rapidly proliferative tumour cells. Hypoxic zones are known to be resistant to most therapies, including radiotherapy. But gaining access to tumours by taking paths as minute as a red blood cell and crossing complex physiological micro-environments does not come without challenges. So Professor Martel and his team used nanotechnology to do it.

To move around, bacteria used by Professor Martel’s team rely on two natural systems; a kind of compass created by the synthesis of a chain of magnetic nanoparticles allows them to move in the direction of a magnetic field, while a sensor measuring oxygen concentration enables them to reach and remain in the tumour active regions. By harnessing these two transportation systems and by exposing the bacteria to a computer-controlled magnetic field, researchers showed that these bacteria could perfectly replicate artificial nanorobots of the future designed for this kind of task.

“These results represent a novel therapeutic avenue for patients with hard-to-treat cancers, once the approach has been validated in human trials,” says co-author Nicole Beauchemin, a professor of Biochemistry, Medicine and Oncology at McGill and researcher at the Rosalind and Morris Goodman Cancer Research Centre.

An interview with Professor Martel with RT America to explain how the nanorobots are better at targeting cancer cells than current cancer treatments.

This work was supported by many research centers and consortiums in Canada such as the Consortium québécois sur la découverte du médicament (Québec consortium for drug discovery – CQDM), the Canada Research Chairs, the Natural Sciences and Engineering Research Council of Canada (NSERC) and the Research Chair in Nanorobotics of Polytechnique Montréal.

To overcome some limitations of the previous approach, professor Martel has been leading a new research that uses the Particle Swarm Optimization (PSO) algorithm to increase the number of dimensions in the search space and to optimize targeting cancer cells in blood. This research took part at 2016 IEEE/RSJ International Conference on Intelligent Robots and Systems recently on October.

Besides replacing the toxic chemotherapy that has plenty of harmful side effects on the entire human body, this research will not only open doors for new inventions and applications, but it also will pave the way for inventing new medical, imaging and diagnostic agents.

You can find more details, videos and photos in this media kit from Université de Montréal. You can also check this TEDx talk by Professor Martel about using nanotechnology in healing cancer.