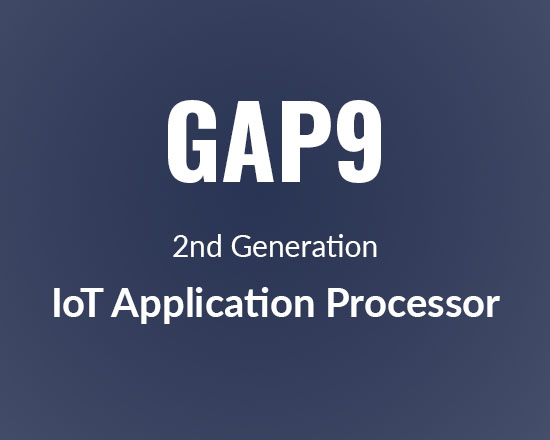 Last year, GreenWaves Technologies launched the GAP8 multi-core RISC-V microcontroller, aimed at artificial intelligence (AI) at the edge at ultra-low power consumption. Results from the GAP8 IoT SoC shows it performs inference at 3.7mA against 60mA for the same workload on STM32F7 Arm Cortex-M7 MCU. As a result of this performance, the company has now expanded its GAP IoT application processor family They launched GAP9, which delivers five times lower power consumption, in comparison to GAP8 microcontroller, and also enabling inference on neural networks 10 times larger. It was launched at the RISC-V summit at San Jose California on December 10-12.

“The GAP family provides product designers with a powerful, flexible solution for bringing the next generation of intelligent devices to market.”

The GAP9 can be applied to bi-directional multichannel, synchronized digital audio interfaces for wearable audio products, CSI2 and parallel camera interfaces for low resolution, low power cameras used in computer vision, etc. For clarity, the chip is capable of processing MobileNet V1 neural network with 160 x 160 images by means of a channel scaling of 0.25 in just 12ms with a power consumption of 806μW/frame/second. For security features, the chip has a built-in AES128/256 hardware cryptography and a Physically Unclonable Function (PUF) unit for unique and secure per-device identification.

All Software development available on the GAP8 will be made on an enhanced GAP SDK. This includes GAP AutoTiler automatic code generator for neural network graphs and GAPFlow tools for automating the conversion of neural networks from training packages like Google TensorFlow. There will also be out of the box, open-source, network implementations such as a full open-source Face Identification implementation. GreenWaves did not mention any GAP9 evaluation/development board, but we might likely see an update to the GAP8-based GAPuino board later.

GreenWaves has not published a product page for GAP9 yet, but for more information, visit GreenWaves’ website.