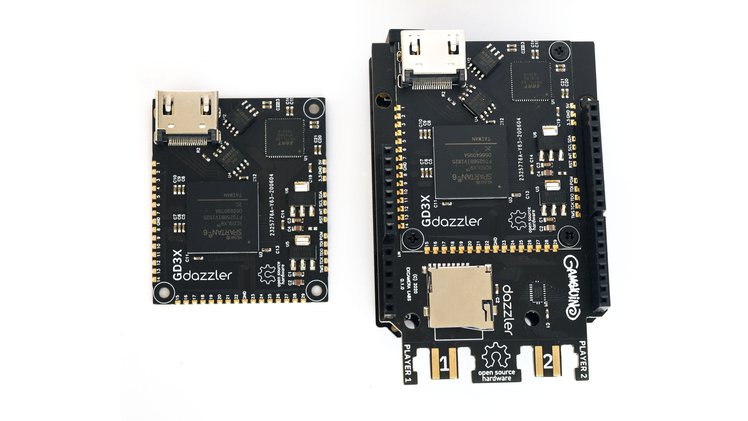 By now, you are probably familiar with Arduino and have probably done some interesting projects. But have you ever consider developing a game for Arduino and got underwhelmed with a limited amount of options? Then you might want to check out the Gameduino 3X Dazzler!

The Gameduino 3X Dazzler is a shield compatible with the Arduino that delivers HD picture and sound to any HDMI display or TV, considered by the developers as ideal for game designers using Arduino or CircuitPython who want rich, responsive data and text visualizations and anyone who wants stunning visuals in their Arduino project. The shield is based on the BT815 EVE embedded GPU, powering its graphics and sound. From the outside, you can also find an FPGA and the HDMI output. It also incorporates two Wii Classic ports, so that you can plug the controllers and get right into action! It states itself as “the most powerful Arduino games system” available to this day, gifting the developers with an easy to use drawing API and dozens of samples and demos to help you get started. Besides the shield, an adapter board is also available for purchase, if you desire to use the Dazzler directly, which does not come with the controller ports.

Regarding the specs of this interesting shield:

The system itself is open source and hackable, allowing you to tinker with the PCB design, the verilog code for the HDMI output and the J1 CPU running on the FPGA and the its firmware, that drives the extra features of the shield. The board contains some addicional interfaces for you to play with, including a JTAG port to reload the FPGA and UART header to allow direct communication with the FPGA itself.

You can also take advantage of the Terminal Mode it incorporates, in order to debug or display useful information, which does not require any graphics programming at all or even play videos at 720p 30fps, and I’m not even getting started on the many cool things this design allows you to.

Right now, the Gameduino 3X Dazzler is in funding at Crowd Supply, with, ending in 41 days. It comes in 3 different packages: the shield itself ($39), the Dazzler Python Game Pack ($89), with the shield, an Adafruit Metro M4, 16GB SD card and two Wii Classic-compatible controllers and the Dazzler Core Pack ($99), with 3 Dazzler Core modules and a 0.1″ adapter board, for easier prototyping.

Tell me what you think about this shield. Will you pick it up and turn it into your next home-brewed console?