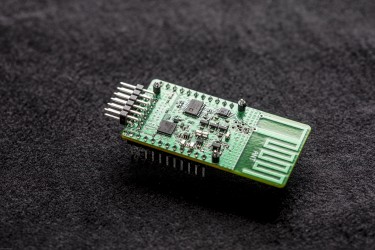 Researchers at the University of Washington developed a new backscatter sensors that can operate over long ranges with very little power. The researchers demonstrated for the first time that the device runs on almost zero power and can transmit data across distances of up to 2.8 kilometers.

Backscatter communication works by emitting a radio signal and then monitoring the reflections of that signal from sensors. As the transmitter generates the signal, the sensors themselves require very little power. But this kind of system badly suffers from noise. Noise can be added anywhere – on the transmitter side, on the channel or on the sensor array. The key to solving this problem is a new type of signal modulation called chirp spread spectrum.

By using the chirp spread spectrum modulation technique, the team was able to transmit data up to 2.8 kilometers while the sensors themselves consumed only a few microwatts of power. Such extremely low power consumption lets them run by harvested ambient energy and very small printed batteries. The cost is surprisingly cheap too. The sensors would cost just 10 to 20 cents per unit if bulk purchased.

Today’s flexible electronics and other sensors need to operate with very low power typically can’t communicate with other devices more than a few feet or meters away. By contrast, the University of Washinton’s long-range backscatter system achieved pretty strong coverage throughout a 4800-square-foot house, an office area including 41 rooms, and a one-acre vegetable farm at extremely low power and low cost.

Until now, devices that can communicate over long distances have consumed a lot of power. The tradeoff in a low-power device that consumes microwatts of power is that its communication range is short. Now we’ve shown that we can offer both, which will be pretty game-changing for a lot of different industries and applications.

These low-power sensors have endless potential applications. They can be used for everything from wearable health monitors to scientific data collection devices. Though there are no confirmed products yet, the team has created few prototypes in the form of flexible sensors worn on the skin, smart contact lenses, and more.