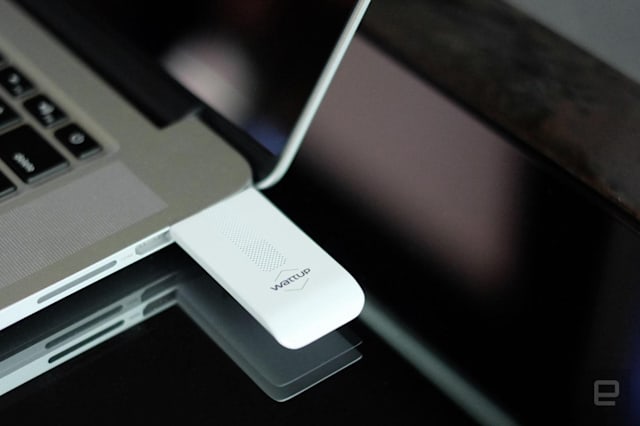 WattUp – RF based Wireless Charging at a Distance

Recently, many big companies such as Samsung have developed wireless chargers which work by induction. These chargers usually consist of a station which needs to be in contact with the device in order to charge. The station defeats the purpose of being able to move and walk while still charging the device. Energeous, a global leader in RF- based wireless charging, created the award-winning device WattUp in order to give mobile power to everyone.

The WattUp transmitter converts electricity into radio frequencies, then beams the energy to nearby devices that have the right receiving equipment. This system has proved to be more practical than induction since it can work from up to 3 feet away. Energeous wants to make a wire free charging ecosystem by taking into advantage the fact that the transmitter can charge multiple devices at a time, and as WIFI it would be able to charge your phone even if you are Samsung and the transmitter is Apple. All kind of devices can be charged using WattUp including (but not limited to) cameras, smartphones, tablets, wearables, and toys.

The receiver uses multiples antennas to collect the micro energy beams created by the transmitter (which makes it safe because power is received in small amounts). There is also an application available in which you can control the devices that are receiving power, how much power for each one, and even what times you want it charging. For example, you can prioritize cellphone charging in peak hours of use and leave other electronics to charge at night just with the click of a button.

The WattUp has already been FCC (federal communications commission) approved, and Energeous offers a variety of prices depending on the range of the transmitter, but it is still not available in the market. The company will be in CES 2018 showing their product, this event will take place on January 9th– 12th in Las Vegas.

Wireless charging not only benefits consumers, but also offers real benefits in terms of efficiency, productivity, and safety in industrial applications. Moreover, cables require maintenance and are easily damaged which makes them unreliable and expensive to maintain. In hospitals there is a constant need for big equipment that uses battery packs or cables, but to maintain a sterile environment WattUp could be a good alternative. Furthermore, in the future this technology could be used to power electric cars avoiding the need for charging every 10 to 40 miles.