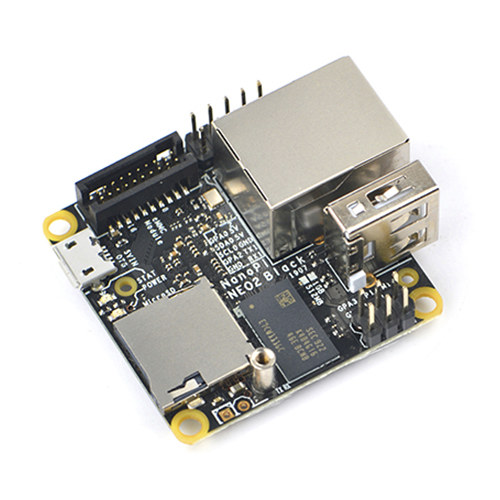 NanoPi NEO2 also known as NanoPi NEO2-LTS from FriendlyELEC is a small SBC powered by Allwinner H5 SoC with an ARM Mali-450MP GPU. It is intended for server/headless applications with Ethernet & USB ports, as well as I/O headers.

FriendlyELEC launched yet another variant called NanoPi NEO2 Black with the same form factor and Allwinenr H5 64-bit Arm SoC. Only upgrading the eMMC flash module and supporting up to 1GB RAM. There are also small alterations to the I/O headers, and featuring a black PCB instead of the blue PCB found in NEO2-LTS.

The new NanoPi NEO2 Black is compatible with Ubuntu 18.04 (FriendlyCore) and OpenWrt (FriendlyWrt). Armbian is also supported by this board.

As to talk about the possible applications for the tiny $20 board, it ranges from networking to the home automation system. Various IoT projects are also possible because of the NanoHAT sensor modules. Existing projects based on NanoPi NEO & NEO2 should be easily ported to NanoPi NEO2 Black. More information can be found along with various board accessories details on this product page.