A research team from UC Berkeley Univercity (Daniel S. Drew, Nathan O. Lambert, Craig B. Schindler, and Kristofer S. J. Pister) has designed and build mini microbot that is capable of taking flight without any motor or moving part. This is all achieved using electrohydrodynamic thrust to provide lift, which is a technique to create air-flow using electrical energy.

Abstract from their published paper

This work presents an insect-scale microrobot that flies silently and with no mechanical moving parts, using a mechanism with no analogue in the natural world: electrohydrodynamic thrust produced by ions generated via corona discharge. For the first time, attitude and acceleration data is continuously collected from takeoff and sustained flight of a 2cm x 2cm, 30mg “ionocraft” carrying a 37mg 9-axis commercial IMU on FlexPCB payload, with external tethers for power and data transfer. The ionocraft’s steady state thrust versus voltage profile, dynamic response to a time-varying signal around a high voltage DC bias point, and aerodynamic drag at incident angles around 90 degrees are measured. These experimental measurements, as well as measured IMU sensor noise, are inserted into a Matlab Simulink simulation environment. Simulation shows controlled hovering and planned flight in arbitrary straight trajectories in the X-Y plane. 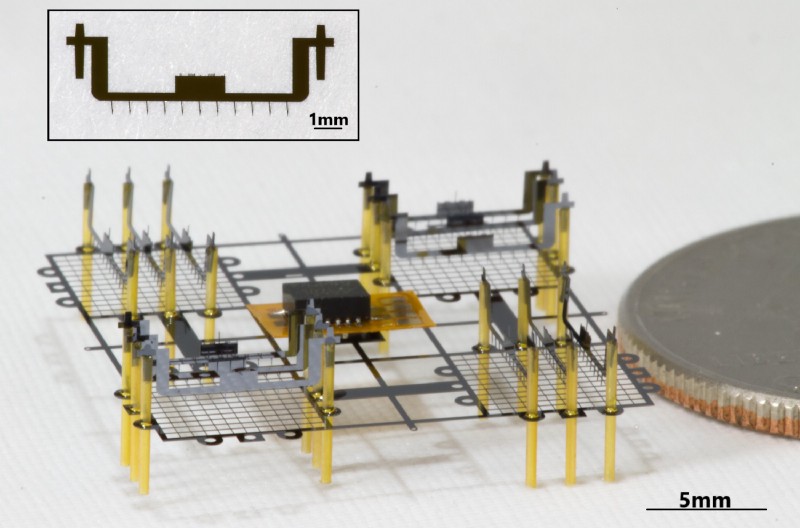 Measuring just 2cm x 2cm and weighing 30mg, the Ionocraft uses ‘ion-thrusters’ that take advantage of a high-strength electrical field to generate ionized air. Ions within that air are drawn to a negative-charged grid, and while on their way to that grid, they collide with neutral air molecules, giving them momentum and thus trust. The microbot uses four thrusters, which were designed using a thin emitter wire and a collector grid. When a voltage is applied between the two it produces a positive ion cloud, which is drawn to the negative grid, air is pushed and boom, thrust. Flight control is done using an onboard IMU, and by altering the amount of current for each thruster, allowing it to move similarly to quad-copters- controlling direction, roll, pitch, and yaw.

Dr. Drew builds fantastic looking devices. It is not likely that is will carry an onboard power supply any time soon however. The onboard IMU is not operational for steering the craft either. His construction techniques though are really awesome and his small crafts do fly.
If anyone is interested in seeing the only ion propelled aircraft that can lift its power supply onboard, please google “Self Contained Ion Powered Aircraft.” It is the first and only ion propelled aircraft with its power supply onboard.