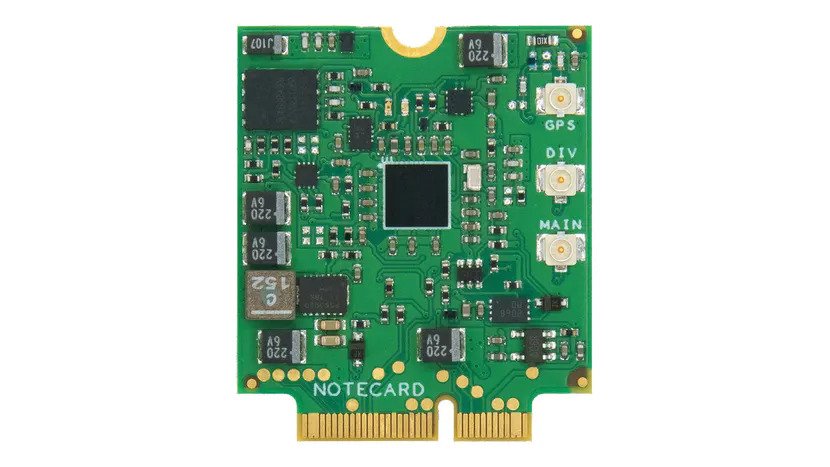 Blues Wireless has announced the new Notecard. It is a $50 LTE modem with 10 years of prepaid service. The company aims to eliminate all the data billing-related headaches that come with IoT devices while using the cellular network. The product comes with a single flat fee that includes the hardware price along with a 10-year global data plan with 500MB data. Blues Notecard is equipped with a modern JSON-based interface. It contains an in-browser terminal that makes the interaction with the Notecard easy, via the Web Serial API.

The Notecard is available in LTE Cat-M and Cat-1 versions for the North American market, as well as a Global model capable of using LTE-M, NB-IoT, and GSM networks. All of its variants include an onboard accelerometer and temperature sensor, as well as GPS capabilities. There are built-in security elements bypassing certificate provisioning. An embedded SIM arrives pre-provisioned as well. The board incorporates a Cortex-M4 microcontroller (users won’t be able to modify it by coding). The board connects to a carrier via M.2 edge connector.

Blues team has a variety of Notecarrier development boards to help make prototyping easier. One of them is the Notecarrier AF which includes 28-pin Adafruit Feather-compatible headers. The board includes embedded cellular and GPS/GNSS antennas, Quiic/STEMMA QT and Grove connectors, and JST connectors for LiPo and solar power. Another board, the Notecarrier Pi features a 40-pin stackable header for use with Raspberry Pi and Pi-compatible devices.

The “Note” ecosystem is concluded by Notehub.io, it’s the Blue’s standalone cloud data and fleet management service. Notecards are in direct communication to the Notehub, which can also act as a bridge to external cloud services via “Routes”. Routes can be used to forward Notecard events to an MQTT server using ThingWorx, Azure — or any JSON supported services.

The Blues Notecard and Notecarrier lines, with included service, are now available for purchase directly from the Blues Wireless Shop, starting at $49 for the LTE Cat-M Notecard with 10 years/500MB of cellular data.