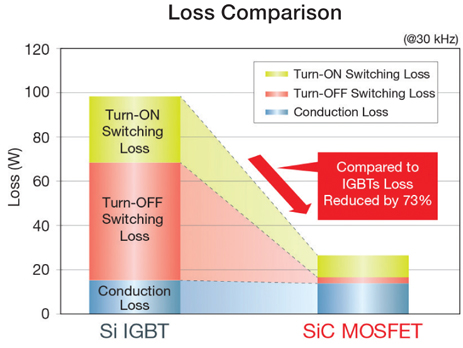 Coping with rapid technological advances and finding efficient energy solutions are the keys for development of power electronics of the future. A new research had been done in North Carolina State University about increasing the efficiency of high-power switches.

Silicon Carbide is a compound of silicon and carbon with chemical formula SiC. It is a wide bandgap (WBG) semiconductor, that allows devices to operate at much higher voltages, frequencies and temperatures than conventional semiconductor materials.

Researchers came up with a high voltage and high frequency silicon carbide (SiC) power switch that could cost much less than similarly rated SiC power switches. This research may guide to new applications in power converters like medium voltage drives, solid state transformers and high voltage transmissions and circuit breakers.

Semiconductor devices like the 15kV SiC MOSFET can lead to great potential applications in high voltage and high frequency power converters. However, these devices are not commercially available and their high cost displaces them from industry competition with other alternatives like the standard IGBT (Insulated-gate Bipolar Transistors) that are widely used, but in the same time they dissipate a lot of energy while switching on and off.

The new SiC power switch, called FREEDM Super-Cascode Switch, contains a series of 1.2kV SiC power devices to produce a 15 kV and 40 mA output that can transcend the 15 kV SiC MOSFET in ease of adoption and cost – since it costs only one third of the estimated high voltage SiC MOSFETs. In addition, this new switch is capable of operating in a wide range of temperatures and frequencies due to its proficiency in heat dissipation, which is considered an advantage in power devices.

Since there is no high voltage SiC device commercially available at voltage higher than 1.7 kV, as Alex Huang said – Progress Energy Distinguished Professor, he assures that this solution paves the way for power switches to be developed in large quantities with breakdown voltages from 2.4 kV to 15 kV.

The research took place in North Carolina State’s FREEDM Systems Center which is funded by National Science Foundation. This center’s mission is to modernize the electric grid and mold the generation of leaders by providing all the needed software and hardware tools, funds, and partnerships with Industries. This project had also participated in IEEE Energy Conversion Conference & Expo on September 2016 and it was presented by Xiaoqing Song, a Ph.D. candidate at the FREEDM Systems Center under Huang’s supervision.

More research projects in the same field can be reached at the FREEDM Systems Center website and further details can be found at the university website.